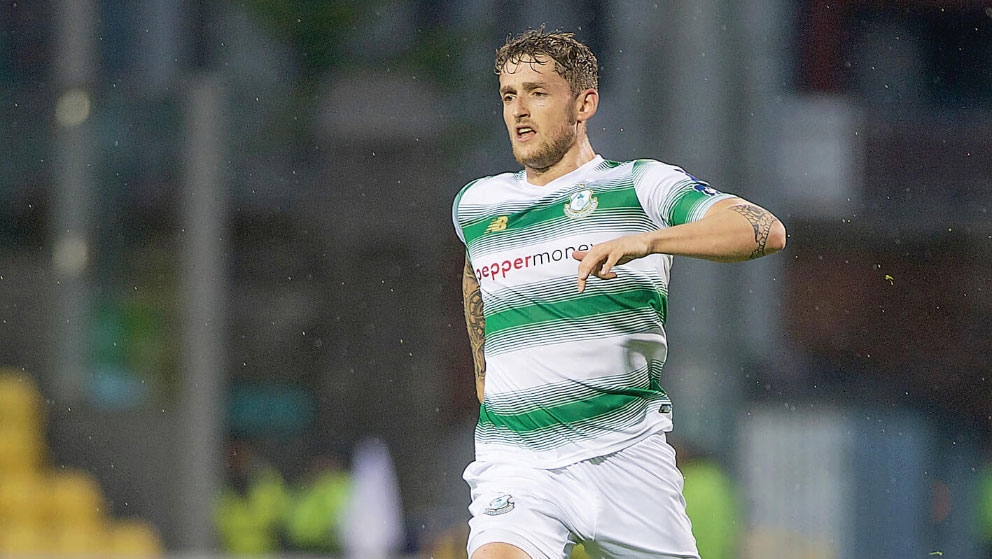 SHAMROCK Rovers will be looking to stay out in front in the race for the SSE Airtricity League crown when they travel to Sligo Rovers on Saturday.

The Hoops will enter a two-week break thereafter and will not want to allow main challengers Dundalk and Bohemians the opportunity to overtake in the meantime.

Stephen Bradley’s side bounced back from narrow defeats at the hands of those very two sides last week when they edged another Dublin derby against St Patrick’s Athletic 1-0 in Tallaght Stadium on Monday evening.

Captain Ronan Finn served up the crucial score in that victory which has kept them four points clear at the top of the Premier Division albeit having played a game more than almost all the teams below.

“We were just delighted to get back to winning ways” said Rovers defender Lee Grace after Monday’s win over Pat’s. “We had two defeats in a row and we needed to get back.

“We played well defensively and we had a couple of other chances. They [Pat’s] had a few chances themselves in fairness. They played two up top and it took is a while to get to grips with it.

“We were very unlucky against Bohs and, going to Dundalk, we had a couple of injuries and myself and Trevor [Clarke] were suspended.

“I still thought we could have nicked a draw. I know we scored late, but we had a couple of other chances” he told The Echo.

While Rovers did enjoy a convincing 3-0 victory over Sligo in Tallaght in March, Grace is not expecting an easy time of it when they meet again on the Bit O’ Red’s home turf on Saturday.

“Sligo is always a tough place to go” he said. “We played them in the final game of last season and they turned us over 2-0, so it won’t be an easy place to go. We’ve just got to play our own game and be defensively solid.

“We have a couple of weeks off before we play UCD so it would be great for us to get the points on Saturday” he added.