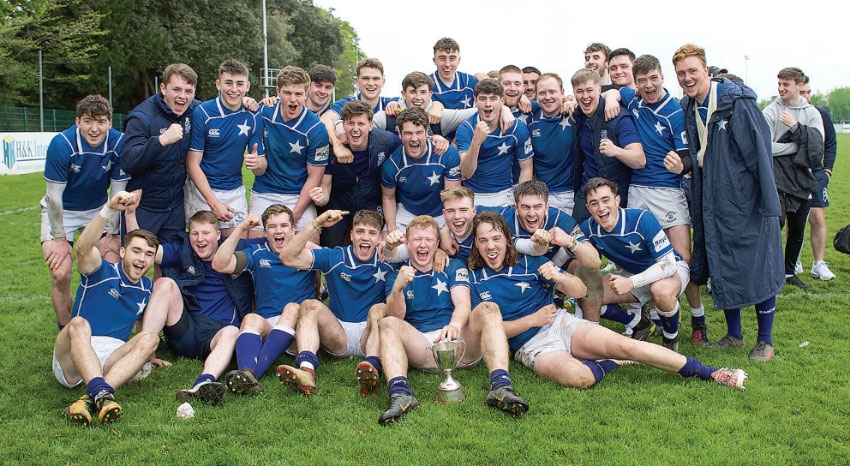 ST MARY’S College Under-20s lifted the Purcell Cup in convincing fashion after they beat Wesley College 28-9 in the final at Lakelands Park on Sunday.

A brilliant Sean Bourke display saw him contribute 18 points to his side’s tally while Eoin Byrne asserted his dominance across the board to bring the cup home to Templeville Road.

The promising Mary’s side where tough to break down in their compact defence but after 11 minutes Wesley opened the scoring from a penalty.

Bourke was on hand to respond with a hat-trick of penalties throughout the half and his cool demeanour rubbed off on his team mates with half-back partner Daragh McDonagh proving instrumental in turning the match in their favour.

Although Luke Mannion had to withdraw after only a few minutes, his replacement Hugo Conway was a welcomed addition to the backline and almost scored a try after skipping past several players.

Play was recycled from right to left after Conway was stopped in his tracks just before the line, with Bourke swaying inside and under the posts to see his side go 14-6 ahead before kicking the conversion.

Wesley started the second-half much the same was as they did the first with a penalty, but the clever organisational play from winger Craig Kennedy prevented any further scores from their rivals.

Over the following 10 minutes, Mary’s marched forward to pin the Ballinteer side back on their own line and eventually where rewarded with a scrum.

Out of that, the ball was fed by McDonagh to Conway who stormed down the wing for a try he was denied earlier in the clash.

Mary’s were not finished scoring yet as Jamie Coolican skimmed over the line after some brilliant work from Ruairi Shields that saw him slalom through Wesley’s cover.