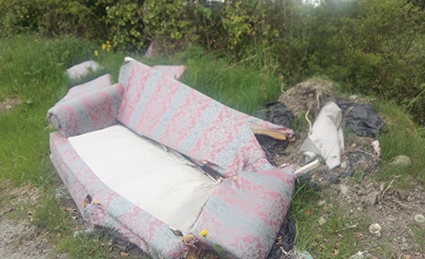 Illegal dumping ‘due to increase in bin charges’

A LANEWAY just off Boherboy Road and the Old Schoolhouse Road in Saggart has been the site of ongoing issues with illegal dumping, which have escalated in recent months leading to building materials and agricultural equipment being dumped alongside household waste.

A sofa dumped on the road

Ms Valerio, who is a mother-of-four, told The Echo: “It’s an ongoing issue, and there’s a lot of stuff that has been dumped there – some of it is rubbish that was dumped there last December.

“It makes the place look really grubby, and I’m worried about walking through the laneway with my kids in case they catch something.

“Building materials and farming equipment has been dumped there – it’s not just household things.”

In a statement to The Echo, a spokesperson from South Dublin County Council’s department of the environment, water, and climate change stated that they had received no complaints about illegal dumping in this area of Saggart.

The spokesperson stated that the site was visited “as part of our routine Litter Warden Service patrol, bags of rubbish were observed today and are being examined, after which they will be removed by our public realm operations crew.

“All instances of illegal dumping are investigated by our Litter Warden Service but it is proving continuously difficulty to identify the culprits.

“As well as our Litter Warden Service, we deploy innovative and emerging technology, including CCTV and Programmable Audio Messaging Devices to tackle the problem of illegal dumping and fly tipping, and we are currently training staff in the use of drones.

“In managing technological service, the council is mindful of resources available, and requests for the installation and use of such technologies are assessed on a case-by-case basis, having regard to certain criteria, including site suitability and the repetitive nature of illegal dumping and fly tipping.”