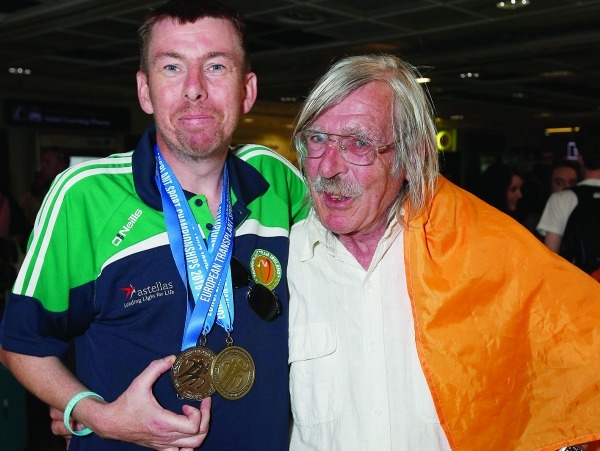 Lenny (36) won a silver in the Petanque singles and bronze in the 5k power walk. His father, Michael, was at Dublin Airport along with a host of friends and supporters to welcome the team back.

Overall the team’s final medal tally was a staggering 21 Gold, 19 Silver and 29 Bronze. This placed Ireland’s 28-strong team in fifth position on the medals table with host country Finland, and a much larger team of 96 athletes, taking top position out of 24 competing countries.

In second place was Hungary, followed by Great Britain and then Germany. Despite extremely changeable weather and heavy rainfall at the Championships in Vantaa on Monday and Friday, the determination and strength of the Irish athletes was consistent throughout.

So too was the camaraderie and sportsmanship that they displayed not only with their own team but with athletes from all of the participating countries.

Lenny says its an experience he will never forget. He was unlucky not to bring home a third medal. He said: “We came fourth in the Petanque doubles. We were pipped at the post for a medal. It was a great experience, with great people and held in a great venue.”

Lenny says that the championships demonstrate the importance of organ donation and transplants.

He said: “It really shows how organ donation and transplant donation make a massive difference. There was a great team spirit. When people weren’t competing, they went out to support the athletes who were competing. We all looked after each other. There was a great sense of camaraderie.”

He said the 5k power walk was tougher than expected. Despite this, Lenny still walked away with a bronze medal.

He said: “It was tough enough. I started to get tired by the last two laps. I was extremely happy to get a medal. I was just happy to finish the race.”

Lenny doesn’t intend to give up the training anytime soon. Next on the agenda for him is the World Transplant Championships next year in Malaga.

He said: “I just plan to keep training and hopefully I will be picked for the trip to Malaga next year”.

The strong sense of team spirit really shone through at the Track and Field when Relay Team members described their relay event as the “highlight of the week” as they were working together as part of such an inspirational team.

At Track and Field events and all other events throughout the week, the Irish team were noted for cheering not only for themselves but all the other participants from each of the 24 countries involved.

New Team Doctor Claire Kennedy (above) from Lucan took fantastic care overseeing all of the team which included six athletes receiving dialysis treatment. It was Claire’s first Games. She is currently a Transplant Fellow in the Transplant Department in Beaumont Hospital.

Team Manager Colin White summed up the week as a joyful and fantastic experience full of the Irish team spirit.

He said: “The stand-out moment for me was today at the athletics track. The announcer knew that each time he would call an Irish name that he would get a huge reaction from the Irish. This for me really summed up the Irish team spirit.”

Letters of support were proudly posted on the team blog www.transplantteamireland.wordpress.com, including some from many sporting personalities including Rep. of Ireland manager Martin O’Neill, FAI chief John Delaney, GAA’s Mickey Harte, Alan Brogan and Brian Cody.

Less than two weeks later some of the team will be joining others including Ireland’s growing children’s transplant team to compete at the British Transplant Games in Liverpool from July 28 to July 31.