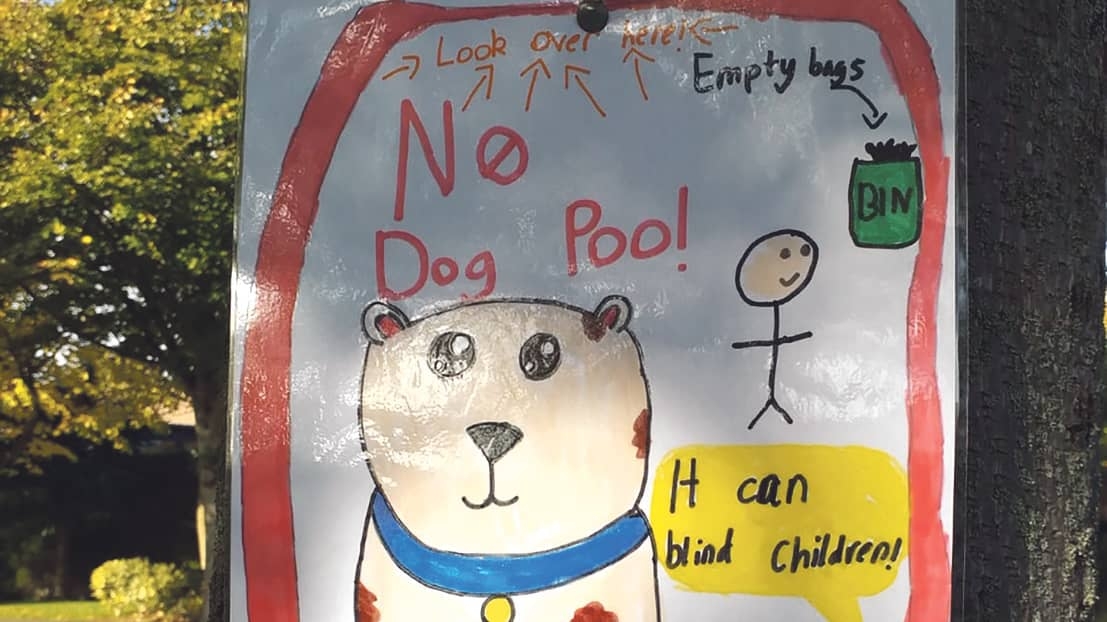 THE removal of anti-dog fouling posters in Firhouse which were made by local schoolchildren was a “shameful” act, according to a parent.

Ciara Forrester, whose children attend Scoil Treasa and Scoil Carmel, was frustrated by the sight of dog poo in the paths around the school and decided to enlist local schoolchildren to try to combat the issue.

One of the dog posters on the trees

The schoolchildren created colourful posters telling people to properly dispose of their dogs’ waste, and some warned of the dangers of toxocariasis, which can be spread through dog faeces and cause blindness.

“Lately the amount of dog dirt on the paths has gotten out of hand,” Ciara told The Echo.

“Each morning children are stepping in it and I’m sure it’s an issue for many communities.

“The council have put up some signs but these don’t seem to be making any difference.

“My son loves to climb the trees along the walkway as we walk home, as do many of his school mates, while their parents have to watch the ground each day for fear of an accident.

“I decided to take matters into my own hands and asked the children in my son’s class to design some pictures asking owners to clean up after their dogs.”

Ms Forrister then laminated the children’s colourful posters and hung them on trees leading up to the schools on the morning of Monday, October 12, but by the following Wednesday all of the signs had been removed – and it is unclear who removed them.

“I don’t know who has removed them,” added Ms Forrister, “but in my opinion it’s shameful that someone has taken them down.

“They were lovely children’s pictures and neatly hung. I’m disgusted and frustrated that an effort to tackle this issue has been prevented.”

Carly Bailey, Social Democrats Councillor for the Rathfarnham and Templeogue area, is planning to table a motion at an area committee meeting next month, requesting that artwork created by local children be converted into official anti-dog fouling posters by South Dublin County Council.

Cllr Bailey said: “It was really heartening to hear of children taking the initiative to help solve a problem in their local community.

“We want to encourage children to be active citizens and to empower them.

“If this pilot gets the go ahead, it sends a clear message to them that their voices matter and will help discourage the thankfully small minority of dog owners who refuse to pick up after their dogs.”

When contacted by The Echo, a spokesperson for South Dublin County Council said they had previously erected their own anti-dog fouling signs on the pathway behind Scoil Treasa and Scoil Carmel after receiving a request from residents.

The spokesperson added that the council was not involved in the removal of the signs, and that they had previously held competitions in schools where the winners’ anti-dumping/anti-dog fouling messages were put onto suitable signage.

“The council would be happy to run a similar competition again in the county,” they concluded.

NEWER POSTCoronavirus: Five additional deaths and 720 new cases
OLDER POSTRonnie always went above and beyond the call of duty