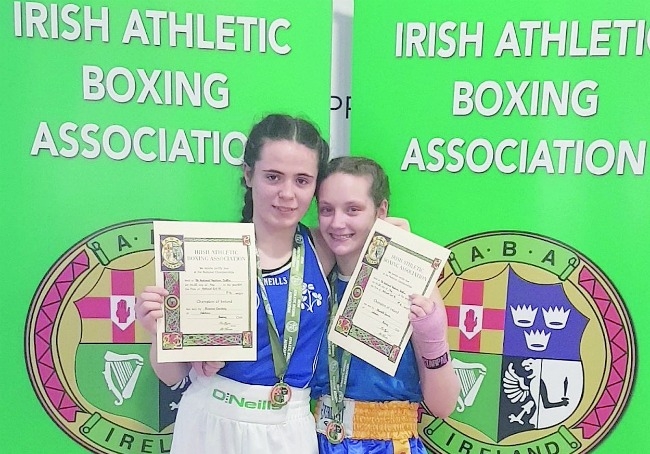 IT WAS a double for Jobstown Boxing Club at the National Girls Champ-ionship Finals in the National Stadium on Saturday.

After turning in a gritty performance in her recent loss to an older opponent in the France v Ireland international tournament, Chantelle Spencer scooped the Girl Four 49kg title following a dominant performance against Na Fianna’s Nicola O’Brien which earned her a unanimous decision.

Indeed the Tallaght girl demonstrated great skill and energy as she wore her opponent down, dishing out a second round standing count in the process.

Spencer had secured her place in the title bout following a hard fought victory over Louise McSorely of Two Castles in the penultimate rounds.

Saturday’s win marked her first national title since she took the All-Ireland Girl One honour and it served also to secure her passage into the National Cadets Championship in August when she will battle it out for a place in the Europeans.

“Brianna dominated the fight from start to finish and had her opponent on the backfoot” said Jobstown coach Amanda Spencer.

The title win was a huge boost for the two-time Dublin Champion espec-ially after she was forced to miss last year’s Nationals with a broken leg.

While she is too young to contest the Cadets later this year, she is sure to be kept active with a number of club tournaments including the Monkstown Box Cup next month.