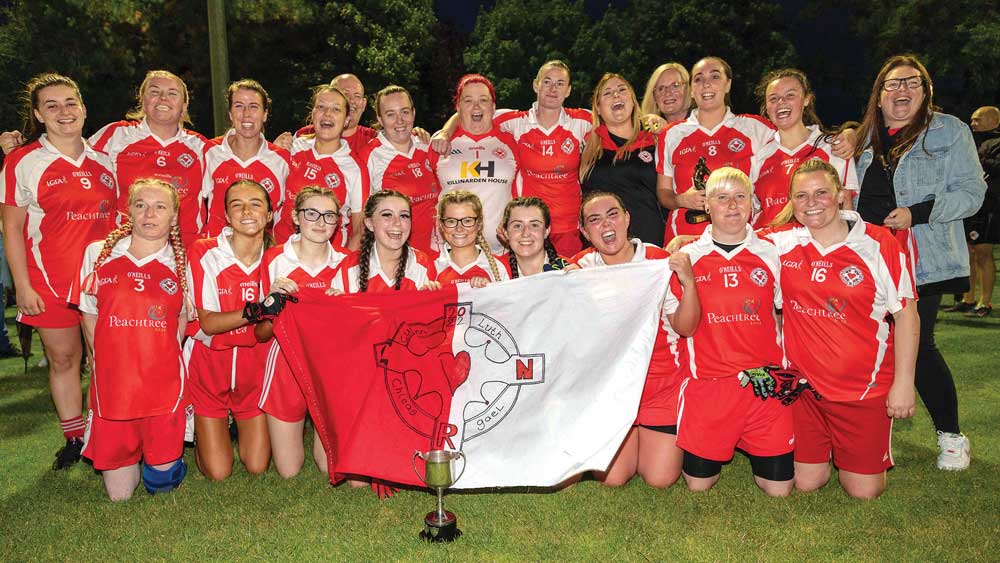 THERE was joy for Croí Ró-Naofa junior ladies football team when they secured the ‘F’ Championship crown after seeing off Na Gaeil Oga 1-9 to 0-5 in St Margaret’s last week.

The Killinarden side had to hold off a strong challenge of the Lucan outfit in a game that hung in the balance right up to the final 10 minutes.

However Croí dug deep and broke through for a couple of well-worked scores to see them over the finish line in the second half.

Croí played with the slight breeze and hill in the first half and by the interval established a 0-5 to 0-3 advantage.

Player of the Match Jessie Wall sent over four points from midfield, two coming in each half while Sophie Parkins, Cherie Kavanagh and Sue Murray chipped in with scores.

Croí did create goal chances in the first half, but the Na Gaeil Oga keeper kept her side in the contest with a string of good saves.

The second half saw Croí introduce Alicia Moore and Emma Reilly at half-time and they played a key role in landing the title for their side.

Reilly was involved in the only goal of the game five minutes into the second half when her perfect footpass went over the heads of the Na Gaeil Oga defence and Cherie Kavanagh was quickest to react and guide the ball to the back of the net.

However, the Lucan side piled on the pressure for the next 12 minutes and were unlucky not to reduce the lead after Croí keeper Paula Dent pulled off a couple of two point blank saves.

Croí finished the game strongly with Wall and Murray popping over scores to put the game out of reach.

It was a sweet win for Croí who had earlier in the season lost to Na Gaeil Oga by a point to finish second in the league.

Sisters Lisa Murphy at full back along with Nicola Browne at centre back put in solid shows for the winners as did Sue Murray and Cherie Kavanagh in attack.

Croí can now look forward to a cup semi-final match later this month.