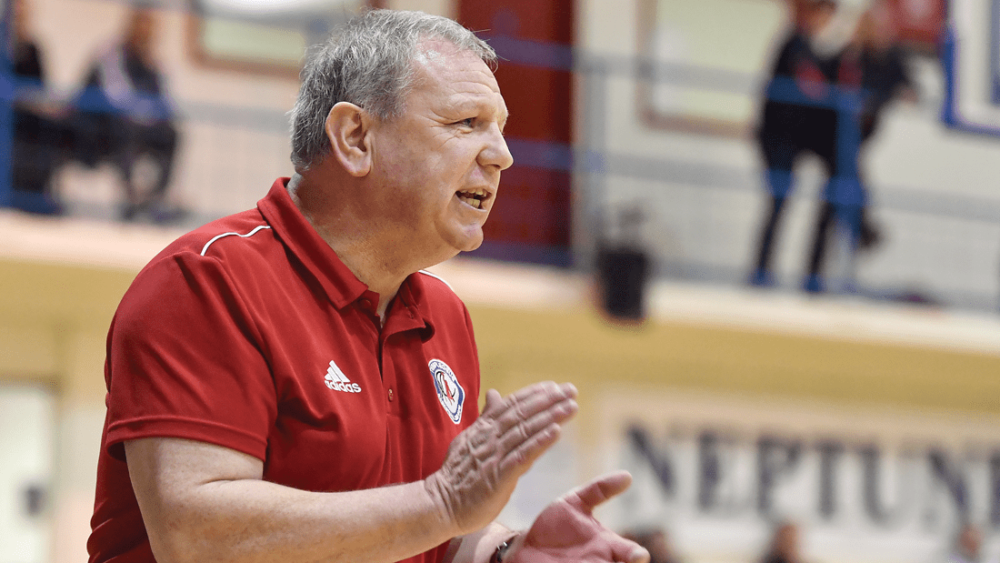 Head Coach, Mark Keenan has overseen quite a number of changes to his Griffith College Templeogue squad

Keenan overseeing a changing of the guard at Templeogue

HEAD COACH, Mark Keenan is overseeing a changing of the guard at Griffith College Templeogue as the team gears up for the start of a new campaign in the Men’s Super League.

Indeed, the Reds will be without a number of familiar faces when they tip-off their new season against NUIG Maree on Saturday in the National Basketball Arena.

Jason Killeen, Lawrence ‘Puff’ Summers and captain, Stephen James, who were such an integral part of what has been a golden age for the side, will not be lining out for Keenan’s team this term and the Templeogue boss has been working hard to replace such stalwarts with the quality needed to see them remain a competitive force in the top ranks of Irish club basketball.

“There’s been a lot of changes, a real freshening up of the squad” Keenan told The Echo.

“Jason Killeen has gone back to Limerick. He’s been there every year that I’ve been there, so it’s a big change for me as well, not to have him around.

“Our direct replacement there is James Gormley from Portlaoise.

“He’s been part of the [Ireland] senior men’s squad for the last two or three years, so he’s gained a lot of experience from that and, while he might still be bit raw, he brings a new freshness to us.

“Lawrence ‘Puff’ Summers is gone as well as a player, but I still might have him as assistant coach. He’s taken over running the basketball side of things in Griffith College” he said.

With such leaders having stepped away from the team, Keenan has looked to build the new-look side around experienced campaigners, Lorcan Murphy and Neil Randolph, with the former taking over as team captain and Randolph, as vice captain.

“Lorcan deserves that, for his performances and leadership, even on the international front” insisted Keenan. “He fully deserves to step up to lead the team.

“Neil Randolph is going to be vice captain, so they’re the two really experienced guys that we’ll be looking to.

“Our American Darren Townes won’t be back, so I have a new import player, Francis Mulvihill from New Zealand.

“He’s a point guard, a really talented guy who has played in the top league in New Zealand for the last couple of years and he’s only 22.

“Forward, Luke Thompson is back in with us, a Templeogue guy originally, who went to Éanna and was in Portlaoise last year. He’s a very good three-point shooter and he brings experience as well.

“Kris Arcilla is back and Enrique Melini from Spain has also returned” he added.

While the panel is sprinkled with a number of experienced campaigners, there has certainly been no shortage of youth injected into the squad.

A host of Under 18s/Under 20s are poised to make the step up with the likes of Jack Wright, Jack Finn, Jacob Fazande and Ireland Under 18 player, Daniel Carberry all hoping to play their part this season.

What’s more, the likes of Daire Murray and Callum McGrail who joined up with the side last year, are also back pushing for starting berths.

“Pre-season has been a lot about getting the young lads up to speed with the older players” said Keenan. “They bring a good freshness to the team.

“There has been a big shift alright, from being probably the oldest team in the league to being probably the youngest I’d say now” said Keenan, whose Templeogue team will be playing seven of their 10 home matches in the National Basketball Arena this season.