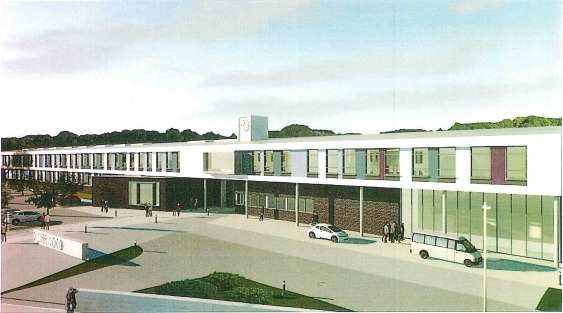 The meeting was hosted by the Dublin and Dun Laoghaire Education and Training Board. Deborah Dunne, the principal of the school and Niall O’Hare, the Principal of Kishoge Community College. Kishoge CC has recently opened and Mr O’Hare was joined by three of his pupils who also spoke at the meeting.

Ms Dunne told The Echo that she was very happy with the turnout at the meeting.

She said: “From my point of view, I was very happy. The meeting was all about teaching and learning. Niall O’Hare, whose school is now up and running spoke and so did three of his pupils.

They were very well received and they spoke as to what it is like being in temporary accommodation and also being the only year in the school.”

A number of parents submitted enrolment applications for the school on the night.

Ms Dunne also said that meetings were held with local residents before the main meeting about some issues including access.

Local councillor John Lahart, who was also at the meeting, said that the issues were “separate” from enrolment and will be dealt with by South Dublin County Council.

He told The Echo: “Those issues in relation to traffic management, pedestrian access and parking will be dealt with by the council. They are separate from enrolment.”

Kingswood Community College will one of the most modern schools in the country and will have a community-based ethos of inclusion together with the highest educational standards. As well as the full Leaving Certificate programme, the school will also provide for the new Junior Cycle Framework.

Kingswood Community College will also offer an excellent sports curriculum and many other extra-curricular activities.
Enrolments are now underway for the school for First-Year entry in September 2016.

The closing date for receipt of applications for enrolments in First Year is February 26, 2016.

Further enquiries can be directed to Orla Guiry at 01/4529600 or by email at orlaguiry@ddletb.ie