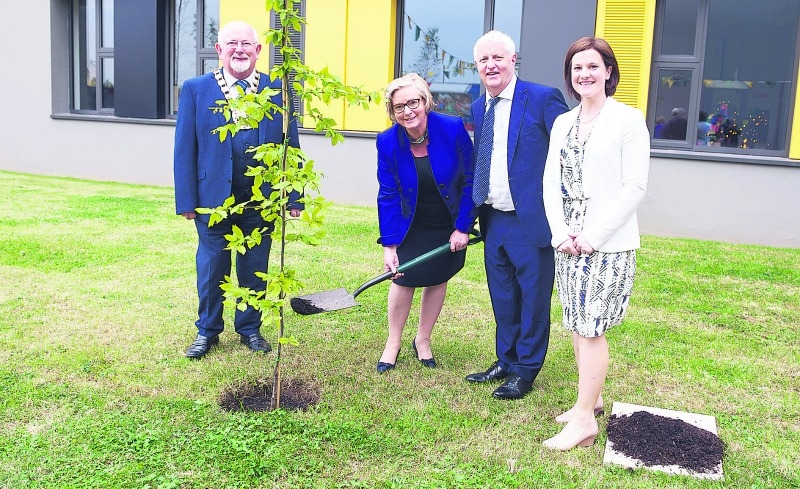 The event was attended by CEO DDLETB Paddy Lavelle and CEO Educate Together Paul Rowe as well as members of the Board of Management, teachers, parents, pupils and Principal Niall Hare and Deputy Principal Maeve Joyce.

To mark the official opening, Minister Fitzgerald unveiled a plaque and planted a tree at the entrance to the school. A commemorative art piece ‘The School Door’ was also unveiled, to highlight to students and the community that the door is always opening in Kishoge.

Speaking at the opening Tánaiste Fitzgerald stated she was “delighted to join with the teachers, staff, parents and most importantly pupils on this joyous celebration”.

She said: “First and foremost we are celebrating this fantastic new building….a wonderful, colourful, state-of-the-art home for your school. A building that in its design ensured that all the students’ needs are catered for in the best possible manner.”

She commended McCollough Mulvin, the award winning team of designers and architects in the project.

Minister Fitzgerald mentioned that on her most recent visit to the school that she spoke to some of the students who were learning coding.

She added: “They gave me a demonstration on the work that they are doing in class through coding, such as making music and videos.

“The calibre of this school is demonstrated by the wide range of activities on offer to students. With more than 24 activities running here either before or after school hours – through from Gaelic football, to running, to dance, fitness, badminton and much more.”

Minister Fitzgerald said that school for young people is about much more than what is learnt in the classroom.

She added : “I have the deepest respect and appreciation for all those who work with our nation’s children, to teach them, to enhance their learning, to support their all-round welfare and development.

“To all the teachers of this school, under the leadership of Niall, I say well done and keep up the good work.”