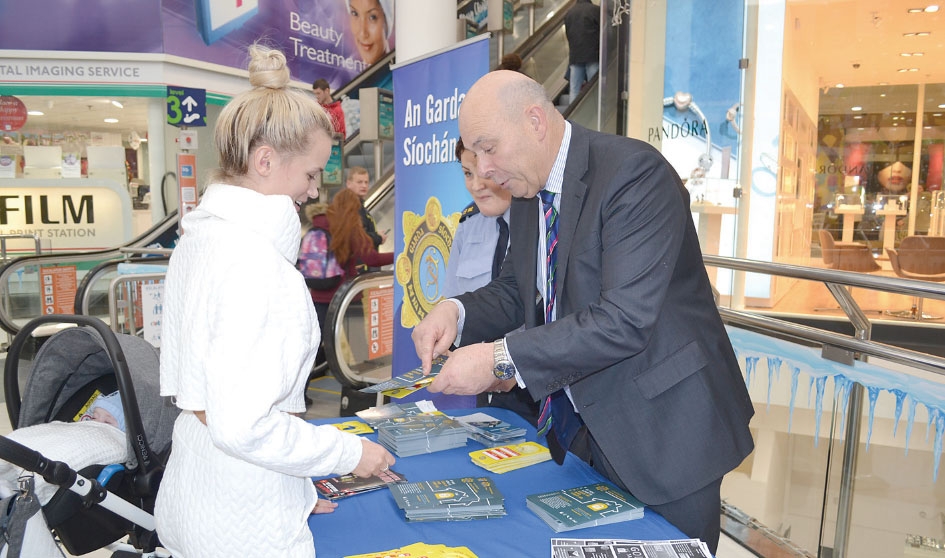 Light up, lock up and stop the burglars

GARDAI are encouraging members of the public to think home and car security in the approach to Christmas, as the number of reported burglaries and car break-ins across the area rise.

Last Thursday, gardai from Tallaght Garda Station took their Christmas security message to The Square shopping centre, where they provided members of the public with information and tips on home and car security and personal safety over the dark winter months.

Tallaght Garda station’s crime prevention officer, Mark Redmond, told The Echo: “We’re asking people to lock up and light up at this time of year.

“We have less daylight in December but more cash and goods in circulation as it’s coming up to Christmas.

“There is also a tradition in the Irish legal system of temporary release at this time of year or the release of a prisoner whose sentence is coming up for review, which can mean that petty criminals who were doing short six-month terms are back out before Christmas.”

He added: “We are saying to people to eliminate all of the signs of inoccupancy in their homes when they go out, so leave a light on or invest in timer switches – make it look like someone’s home.

“It might seem obvious but lock doors and windows and set your alarm, and be careful with cash or car keys.

“Cash is king for these guys and if they see car keys they are inclined to go after them.

“We would encourage people to not keep money beyond their immediate personal use [at home].

“Also, if people are going away for a few days, ask a neighbour who has two cars to park one in your driveway, this will increase security.”

Garda Redmond also stressed that there has been an increase in thefts from cars, with the majority of incidents having property on view.

“These criminals are not going to go around breaking windows speculatively,” Garda Redmond said.

“We’re asking the public to take a minute after they lock their car to check if there is anything on display.

Remember, your car is like a shop window to a thief.”

He added: “Make sure that someone else is not having a happy Christmas at your expense, so light up and lock up and take a few minutes to check that your home and car is secure.”

“We would also encourage people to get to know their neighbours and to be vigilant of activity on their street.”

For further information visit www.garda.ie or contact Tallaght Garda Station on 6666000, with Garda Redmond available to meet with community groups and organisations on crime prevention.

NEWER POSTMinister sent letter on ‘urgent need’ for a secondary school
OLDER POSTThrough the Looking Glass: a series of city and landscape photographs