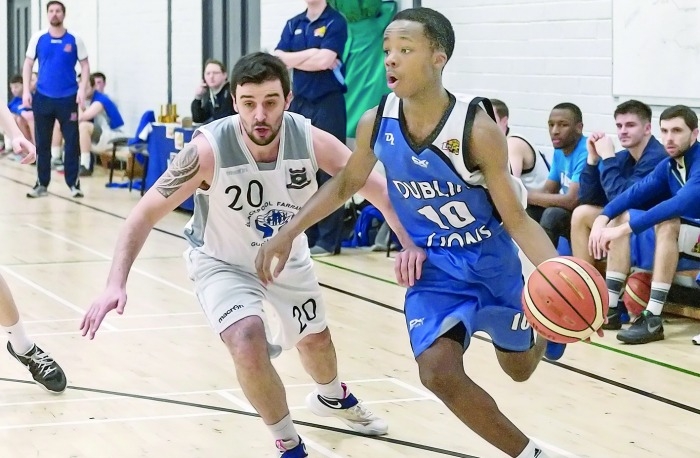 Lions are sunk by Neptune

DUBLIN Lions suffered a heavy 103-65 defeat at the hands of President Cup Finalists Neptune in Coláiste Bride on Saturday.

The Clondalkin side found themselves 22 points down at the half time break with Tanner Brooks top-scoring for the visitors with a 23-point tally.

Igor Markiewicz did work hard for the Lions, hitting 17 points with Adam O’Reilly and Kevin Anyanwu registering 14 and 13 respectively, but it was not nearly enough to reel in a rampant Neptune.

Still second from bottom in the North Conference, the Lions will be hoping to hit the ground running upon their return to action after the National Cup Final weekend when they travel to Coláiste íosagáin to take on Kestrels on February 11.

Meanwhile Dublin Lions Senior 5 Ladies made it through to the Junior Cup final after they beat Northside Nets 32-16 in Mount Temple on Friday.

The club’s Senior 3 Ladies have also made it through to the last four of the Intermediate Cup following their recent win over Oblate Dynamos. They will now face off against Killester in Moyle Park on Monday, February 6.

Elsewhere Oblate Dynamos were unable to contain the free-scoring Carlee Lough who led Ulster Rockets to a 57- to 48-point win over the Drimnagh side on Saturday.

Indeed she amassed 31 points for her team in what was pivotal to their win.

Oblate did work hard and found themselves level on 26 points apiece with their hosts at the halftime recess.

Yet despite 19 points from Kelsey Ellis and a further 10 from Samantha Massey, they were unable to completely undo the damage wreaked by Lough.