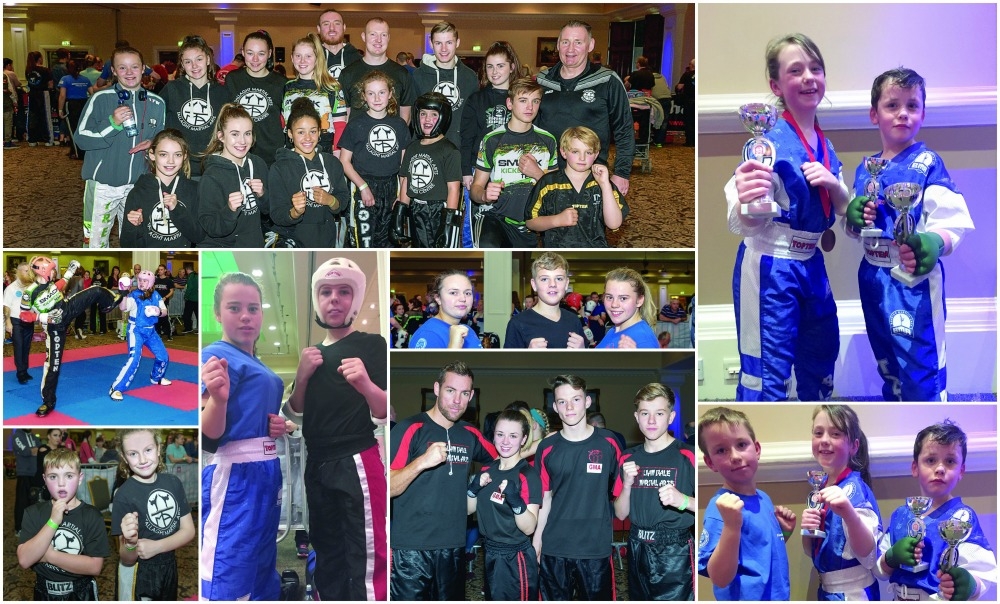 A NUMBER of local martial arts clubs made their presence felt at the annual Bushido Martial Arts Association’s Rumble Open held in Citywest Hotel on Sunday.

The host club fielded a goodfighting squad with many circuit fighters resting for their trip to the Bristol Open International next weekend.

Siblings Ryan and Amy Wade topped the table with three gold and one bronze between them, the former carding two first place finishes with his older sister scooping gold and bronze.

Abigail Duggan returned to competition after a year out and reached the semi-finals of the Advanced Under 13 Points Fighting division from which she was unlucky not to progress.

Sixteen-year-old Croia Egan-Byrne was in top form competing in the Ladies Intermediate cate-gory and took gold in her first ever senior division.

Zach Lamari reached the finals of the Boys Advanced Under 10 Points Fighting only to lose out by a single point in the dying seconds.

Amy Mullins-Smith made her debut for the club and competed in the Ladies Novice Points Fighting division in which she made it as far as the semi-finals.

Liam Bhandal, also back competing after two years out due to work commitments, finished the day with a runner-up medal in the Men’s Heavyweight Continuous division and a bronze in the Men’s Light Heavyweight category.

GRASP Martial Arts followed up on their strong showing in the recent Tallaght Open and ‘Best of the Best’ tournaments with more medals in the Rumble.

Marissa McMillan, earned silver after narrowly losing out to her very well experienced Cork opponent in the final.

This was followed by sterling performances from Titas Belevicius who took gold in the Boys 14 to 16 Years section after three tough fights.

Jack McCormick, after a great semi-final win, was pipped on a split decision to first place before Thomas Hunt negotiated three hard contests in the Men’s 80kg + section to win on a 3-0 majority decision.

The day was topped off for GRASP with Emma Dignam’s fine display in her 3-0 victory in the 55kg+ class.

“I’m very happy with the results from our fighters of late as the standard in kickboxing in general continues to grow and improve with each passing year,” said GRASP Head Coach Liam Dale.

Another man who has pleased with the return from his crew was Black Panthers Head Coach Norman Kelly.

Among his competitors who went top of the podium in their respective divisions were Jordie Musodic (-69kg Seniors Light Contact), Evan Kelly (Age 12) and Natasha O’Neill (Under 10 Light Contact)

There were runner-up finishes for Cody O’Brien, Stephen Hayes, Martin Mongan and Brandon McDonagh while among those who emerged third for the Brookfield club were Keylum Ryan, Dylan Keogh and Byron O’Hara age 8.

“This is just the second competition for most, so for beginners they are doing really well” stressed Kelly.

Tallaght Martial Arts also enjoyed a productive showing in The Rumble with 13 of their members bringing home medals.

Keri Browne made it a double with wins in the +65kg and -65kg Senior Women while Joe Dolan emerged top from the+75kg Veteran’s division before finishing runner-up in the +80kg Light Contact class.

Kellie Morgan was second in the 12-14 Years class and third in the -65kg Senior Women’s field while there were two second place finishes for Stephen Jones in the +80kg Senior Men and Grand Champion contest.