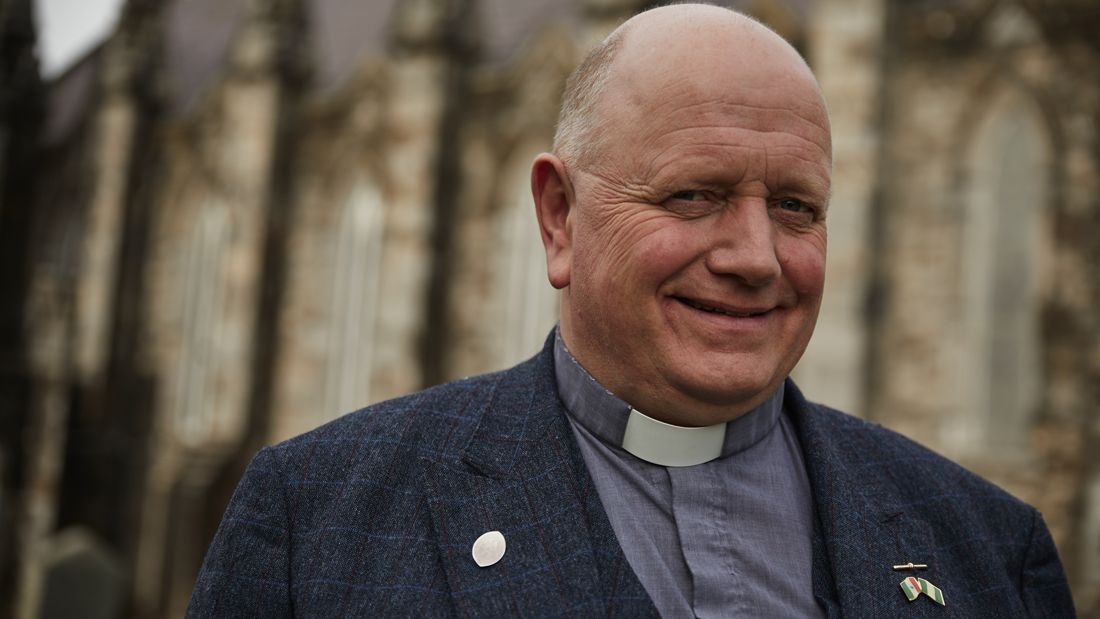 CANON William Deverell has gone live, and will be over the coming weeks broadcasting all of his services online from the historic St Maelruain’s Church of Ireland in Tallaght.

A well known face about the place, Canon Deverell has found his home in Tallaght after travelling along a road that saw him sell some of the first Apple computers in Europe.

He also sold telephone systems and worked in a Dublin city centre jewellers before following a path into the church.

“I am a poacher turned gamekeeper”, William told The Echo.

“I once appealed to people’s greed and now I try to restrain it.

Born and reared in Dublin, a young William met his wife Valerie on the dancefloor of Blinkers night club, which, now closed, was located in Leopardstown.

Shortly after getting married in their mid-twenties, William started on a Philosophy and Theology course in Trinity College, and spent some time living in the Church of Ireland Theological Institute.

It was during these studies that William discovered he had dyslexia.

“I started college in 1987, the year of the Dublin Millenium”, William told The Echo.

“For a fellow who couldn’t read, the words were all so big.

“As I had performed well in tutorials all year but crashed at exams, we realised I had dyslexia.

“I took a year out of college and learned ways to help me manage.

“It’s something I’m always working on but I have ways to manage and modern technology has been a big help.

“I’ve been invited into a few schools to speak about my dyslesxia and I think some young kids find it encouraging to see that it didn’t stop me from doing what I wanted.”

After leaving college and being ordained a curate, William was based in parishes in Northern Ireland before coming to Tallaght in 1999.

“I came to Tallaght for the ordinariness of the people, there’s nobody pulling rank with you, people are the salt of the earth and that’s why I’ve stayed”, he said.

William has himself helped to build Tallaght’s community spirit, working alongside other faith and community leaders in creating a strong sense of togetherness in the area.

Known to always make time for community events and celebrations, William is never too busy for a chat.

William told The Echo that his passion for a chat could stem from his dyslexia, as he more than often opts to call someone rather than text.

However, his own preferences aside, he sees the value in talking, especially as our communication centres more and more around text messages and email.

He aslo believes that at this time of uncertainty, people need to pick up the phone.

“The phone will be very important in the coming weeks”, William said.

“It’s a great way to keep in touch, and we all have time to talk.

“Hearing someone’s voice is very important at this moment, people will need warmth and to hear a voice.”

In the past week, William has started delivering his services through Facebook Live, with the help of his wife Valerie and his daughter and son.

William has invited everyone across the community to follow the St Maelruain’s Tallaght Parish Church of Ireland Facebook page where his services will be going live.

There is also a schedule of services on the Facebook page.

NEWER POSTNature on our doorstep: Woodlands in Springtime
OLDER POST‘We are appealing to you to help share a sense of hope’