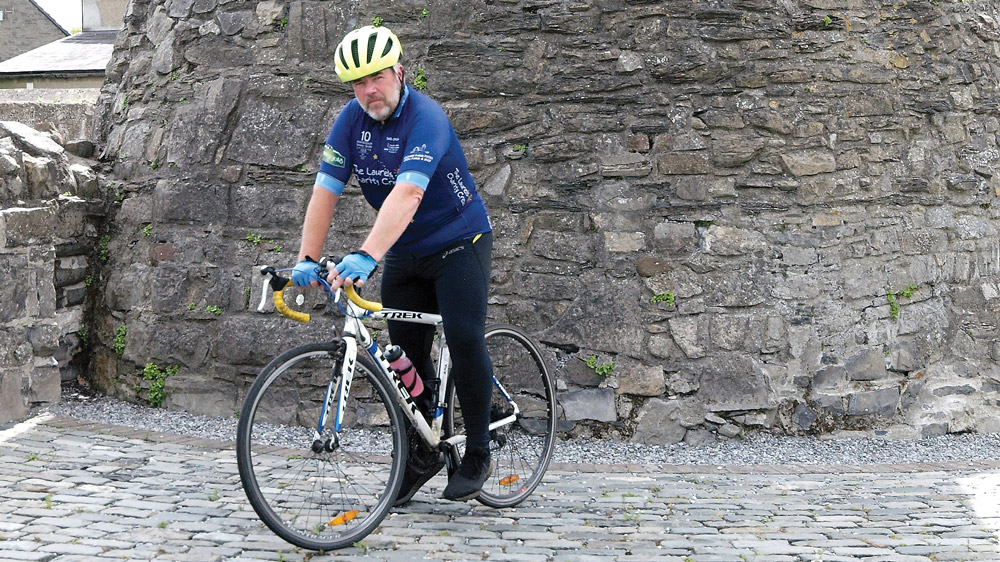 Derek preparing for a cycle with the Laurels Charity Crew

Day to day, Derek lives with a language disorder known as aphasia, which still puts him under a bit of pressure when communicating, as a direct result of a stroke.

When chatting with The Echo over the phone, the 51-year-old was in full-flight telling his story of opportunity, second and third chances, and facing adversity.

Originally from Castlelawns in Tallaght, Derek began working in Dunnes Stores in 1998, first in Kilnamanagh and later The Square.

With a desire to move on, Derek quips that “a big part of my life became crusty bread” after taking the opportunity to work in Cuisine de France “sweeping the floor”.

“I didn’t have any college or anything like that, done my leaving cert the whole lot but I worked really hard. I was also very fortunate, sometimes we get lucky and I was probably the right person at the right time.

“I have to say, my life blossomed, it really exploded for me but when I was 38, I actually had a heart attack issue.

“I collapsed on a running machine. I’m a very lucky person. I was in St Vincent’s Hospital and they were checking me because there was a problem that needed to be done. 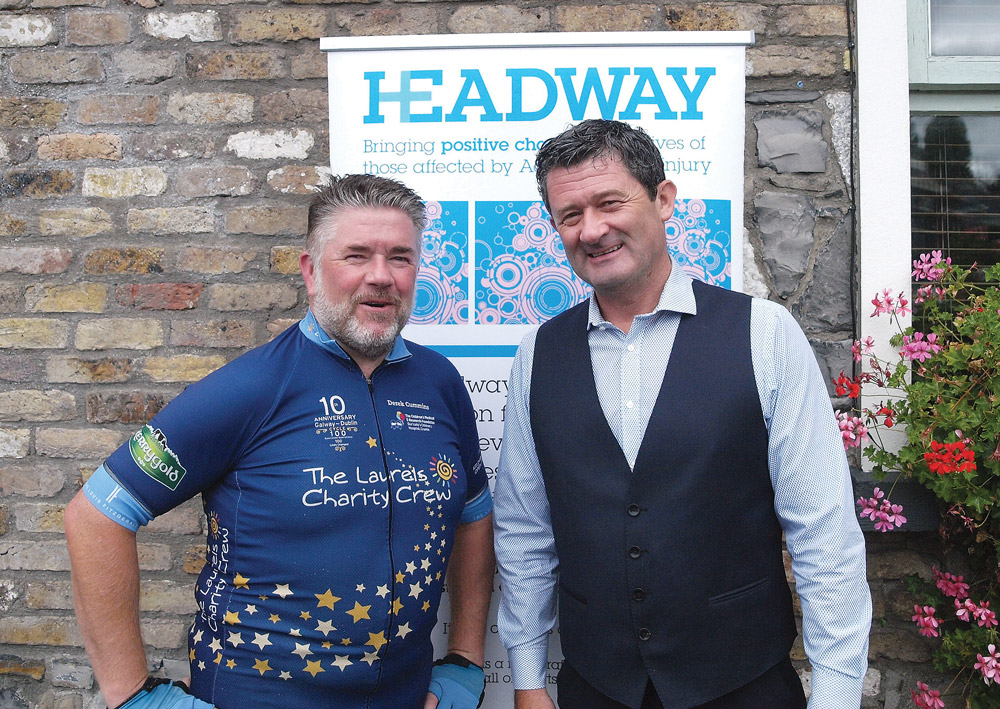 “More or less, I was brown bread, I died.

“Luckily, when you’re in a hospital between the doctors and nurses, consultants, between defibs, new electrics, new pipes and medications, I ended up having a triple bypass.”

Still a young man at the time, Derek describes himself as a “new man” coming out of the operation and was back to the grindstone within two months.

An avid jogger, Derek loved putting the runners on and heading out at 6.30am every morning before work – but one day, it all came to a halt.

“You think that bad things happen in your life, I thought my issue was the heart attack.

“But unfortunately, four-years after that, God decided he had a different plan.

“Some people said that maybe I ran too much. After I had the bypass and all that, I run early in the mornings with the job that I had, out at 6.30am into Corkagh Park and all that.

“I thought ‘jesus that was weird’, so I went into my kitchen to make a bit of coffee but I ended up destroying the whole place, with the coffee, the milk, the water, the whole lot. 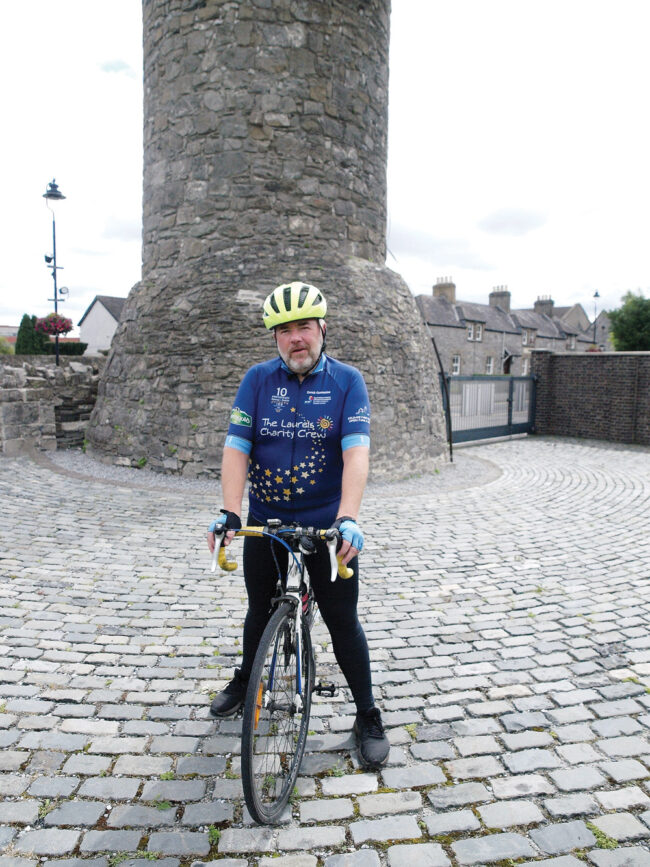 “I’m thinking that this is strange. So, I went up to the wife and in fairness to Tracy, I don’t know how she knew so quickly, but she knew fairly quickly that it was stroke.”

While Derek was not displaying many of the symptoms from the acronym FAST, which strands for Face, Arms, Speech and Time, Tracy was able to recognise his poor condition quickly and called the emergency services, in which he was transported to Tallaght University Hospital.

“I was shattered into millions of pieces, and I was only 42,” Derek recalls.

“It was a scary time. I felt I was totally finished to be honest.

“When you’re at that level, you feel like you have nothing left to give. I was very, very low off the back of that. But again, I was a very lucky individual.”

Recovery was a tough challenge at that stage, but it was something Derek was never going to shy away from and so, he started again.

With the support of his family, Derek did eight-weeks in the National Rehabilitation Hospital and the key for him was working with a speech therapist to relearn the alphabet and how to communicate again, whether it be verbally or written.

There was a point when he was given a book with empty pages in it, and such was his trouble with communication at that stage, he thought he’d never need that.

However, he was wrong and within a year, Derek had started writing poems again – the first one of which was published in the Farmers Journal.

Called The World On My Mind, Derek offered readers an insight into his life without words with lines such as “I never knew I needed words until I lost them, and now I miss them so much” and how he will “will find them again, I promise”. 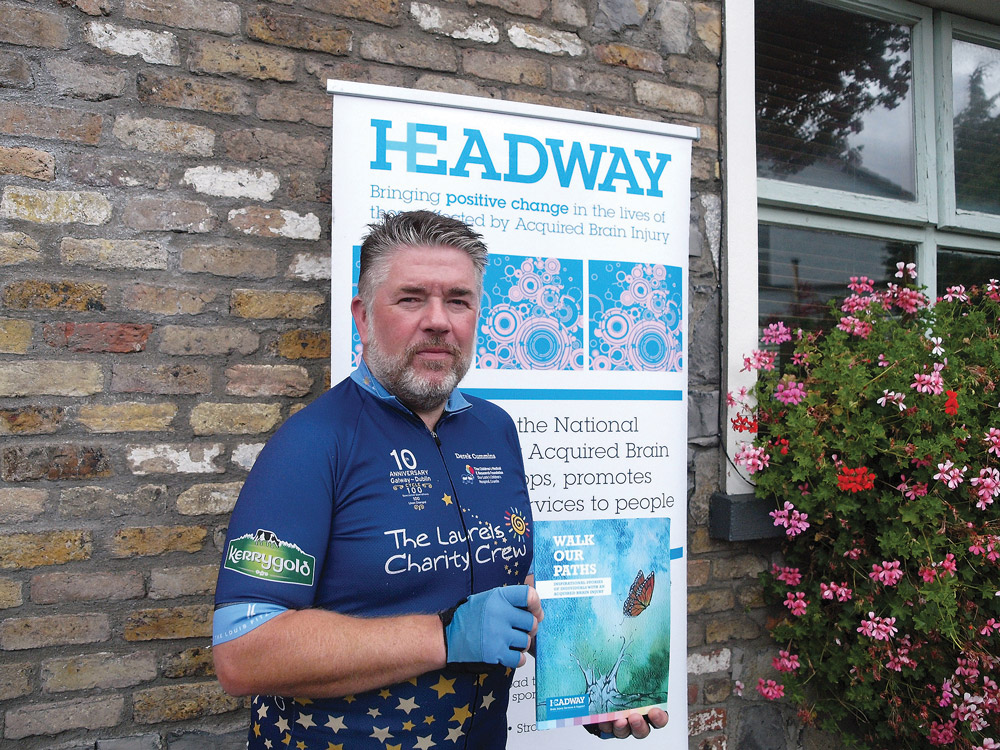 Derek holding a copy of the book ‘Walk Our Paths’

“That was huge for me because I had felt that there is a bit of hope here and maybe there is life after a brain injury,” Derek says.

“The fact that I could be able to do that, you don’t realise when that piece was in the Farmers Journal, to see it printed, it makes it so real and again, it gives you that bit of hope.

“Off the back of that, I got a place in Headway, in the main one in town. They’re basically for people that have had brain injuries and the people there were fantastic.

“The key thing was I was talking to people, we were all in the same boat. Some people had accidents, strokes, tumours or all the different things.

“There was a thing called the Harbour Group, job club, the choir… and I just felt so comfortable and safe, you didn’t feel like you were alone because you’re constantly sharing what you’re doing.

In February, it was reported in The Echo how Derek made a contribution to Headway’s book about inspirational stories of individuals with an acquired brain injury, called Walk Our Paths.

According to Headway, there is an estimate of around 9,000 and 11,000 people who sustain traumatic brain injuries in Ireland annually with a further 8,000 diagnosed with a stroke.

Derek has lived in Clondalkin for more than 30-years and before his stroke, he became heavily involved with the Laurels Cycle Crew, helping fundraise €1 million for Our Lady’s Children’s Hospital.

The father of one became a member of the organising committee after being invited by founders Damien Long and Denis McCarthy to link in, and he still brings a lot of passion to the group.

Today, after reaching their €1m target for the children’s hospital, the Laurels Cycle Crew has switched focus and is in the throes of a three-year plan to try raise €250,000 for Headway.

The crew host two cycle events annually – the Galway to Dublin cycle and the Christmas Santa Cycle from Phoenix Park to Clondalkin Village.

Next month, the crew’s Galway to Dublin cycle takes place September 23 to 25, with hundreds of cyclists expected to take the 220km trip across country.

“It’s now nine years since I’ve had my stroke and sometimes, I wonder how far I’ve actually got,” Derek reflects.

“Things go so quickly and it’s hard to believe it’s actually nine-years-ago since I’ve had my stroke and what my life was before.

“I know I’ve changed an awful lot, and it has been hard to work with aphasia.

“I just don’t whinge about it, it’s a hidden disability but even having this conversation today, I have everything written in front of me to put a structure on what I’m saying.

“It’s fine, I can struggle and get through it.

“I am a very, very individual person in my life that I’ve been able to use things to survive and stay above the water.”