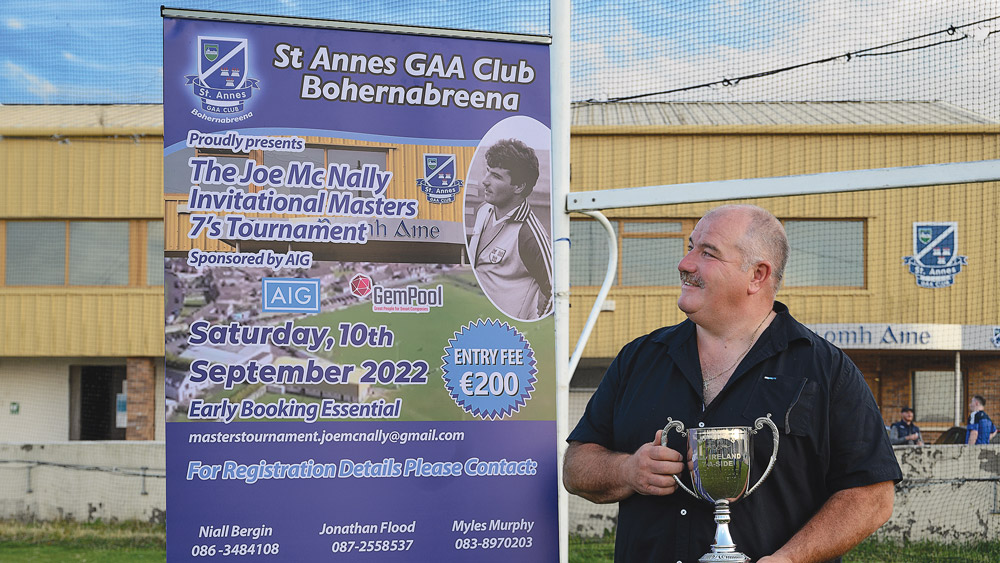 Dublin GAA and St Anne’s legend, Joe McNally, looking at an old photograph of himself on the poster for the launch of the Joe McNally Invitational Masters 7s Tournament in Bohernabreena

JOE McNally has always felt at home on sports pitches, whether playing gaelic football or soccer, with his passion for GAA in particular leading him to be the only player in the history of the sport to win All Ireland Minor and All Ireland Senior medals in consecutive years.

The talented sportsman grew up in Old Court and St Maelruan’s Park in Tallaght, and began his long-held passion for sports as a footballer for St Maelruan’s when he was in primary school.

However, when he turned 10, Joe decided to join St Anne’s GAA Club as many of his friends had joined. This marked the starting point of his almost five decades of involvement in the club.

“My father, Christopher, actually played for St Anne’s all his life,” Joe explained. “I was a juvenile goalkeeper there until I was 15.

“I joined because all of the lads I hung around with were playing for St Anne’s.”

Joe quickly got to grips with playing GAA and learned he had an affinity for it – he began dreaming of following in the footsteps of the players on the Dublin senior team.

“Like every other young fella, when you’re growing up in the 70s and watching the Dubs, you always dream that you’ll make it,” he said. 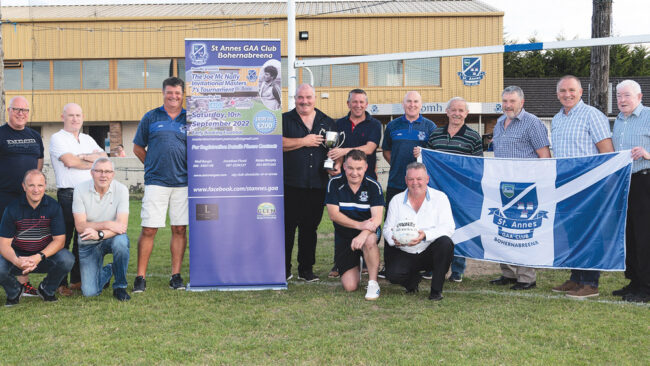 “And I was lucky with a lot of the fellas I grew up with, because they all played for Dublin at some stage.

“I played for the under 14s Dublin team, and that’s where it all started.”

When he played as the goalkeeper for the under 14s, Joe was part of the team that beat Kerry and won an All Ireland Minor medal in 1982.

The following year, Joe was asked to play with the senior Dublin team at the last minute, with the team winning the All Ireland Senior medal after facing Galway.

The Dublin senior team’s goalkeeper, John O’Leary, couldn’t play the match so Joe was asked to take his place, which led to him changing his original plans to play a match against Thomas Davis that day.

“I hadn’t been training with the senior team, I didn’t know them,” he said. “But I feel very lucky. I was in the right place at the right time.”

Throughout his early childhood and adolescence, Joe’s principal focus was on GAA – and while he doesn’t play the sport much anymore, he’s still a constant at GAA matches. 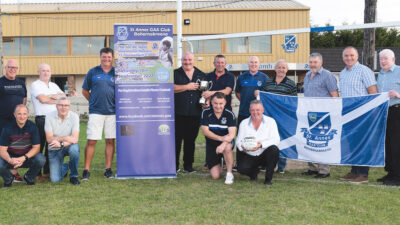 “I don’t play it anymore, because I’ve got too old – my mind wants to, but my body doesn’t! But I try to go to as many matches as possible, and I still play a bit of soccer.”

Over the years, Joe said he’s witnessed a significant shift in the training schedules of GAA players and the regimens they follow, which weren’t a feature of the game when he played it.

“Players have gotten fitter with things like weight-training and diets,” he said. “They get protein drinks now after matches.

“After training, we were lucky to get a cup of tea and a biscuit! It’s changed now, and it’ll change again.

“The game’s getting faster, the players are getting stronger, and you just have to go with the change.”

But Joe’s impact on the sport hasn’t gone unrecognised amid the changes in recent years, as St Anne’s have named a Masters 7’s Tournament after him to acknowledge his accomplishments.

The inaugural event was held in August 2019, but despite its popularity it couldn’t be held in 2020 and 2021 because of the pandemic.

The Joe McNally Masters 7’s Tournament will be making its long-awaited return on Saturday, September 10, in St Anne’s, with clubs from all over Dublin and further afield planning to take part in the over 40s Masters.

“It’ll bring a lot of people together on the day, it’ll be a big family event,” said Joe.

“Each of the teams will line up and we’ll play the national anthem. We’re hoping to have some live music, and face painting for the kids, and there’ll be entertainment in the clubhouse afterwards.”

Reflecting on his achievements on the pitch, and his unwavering passion for GAA, Joe said it was the encouragement of a manager and the camaraderie with his teammates that helped his success.

“I was brought up by a fantastic manager, Pat West,” he said. “Even to this day, he’s a very good friend.

“And a lot of the older players are really good friends of mine. Playing matches with those guys then going out for a pint with them afterwards, it was great.”