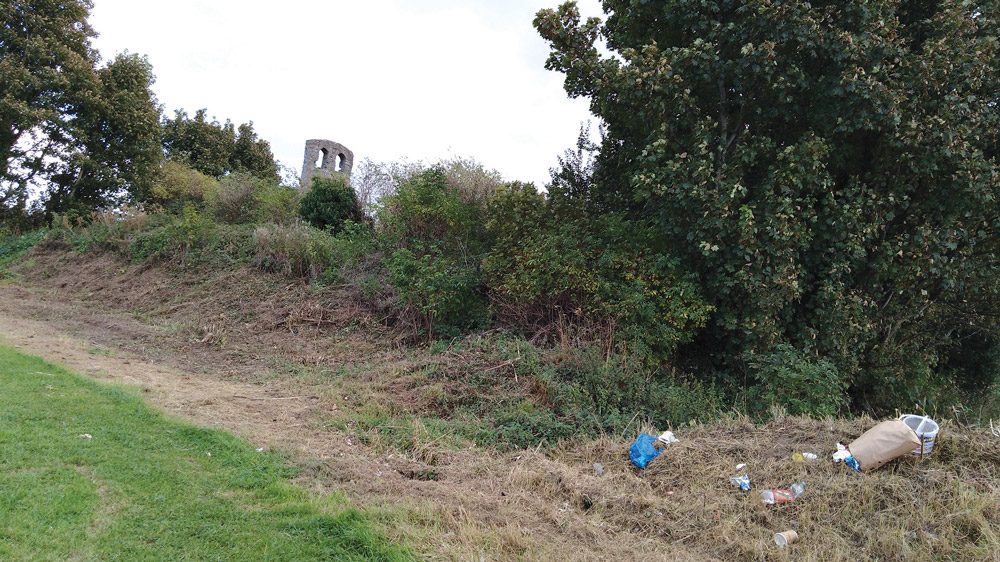 With many years of neglect, the complex fights hard to retain its dignity.

The small ecclesiastical complex comprising St Cuthbert’s church, graveyard and moat is in the townland of Kilmahuddrick, about a mile west of Clondalkin village.

St Cuthbert’s Park, an amenity area measuring about 12 hectares, surrounds the complex, all that now remains of the medieval monastery dedicated to St Cuthbert of Lindisfarne.

The name Kilmahuddrick is said to derive from “the church of Cuthbert” as Gaeilge.

Historians differ about Cuthbert’s origins. Some say he came from Clondalkin, some that he was Irish, others that he was an Anglo-Saxon who lived and became a monk in Northumbria.

According to Butler’s Lives of the Saints, St Cuthbert (Anglo-Saxon monk, prior, hermit and bishop) is “the most revered saint of northern England”.

Born c. AD 634, Cuthbert was a monk in Melrose Abbey and Lindisfarne Island and retained close ties with both places. He closely followed the Celtic Christian traditions of the Donegal man, St Columba, aka St Columcille.

Despite his Celtic Christian roots, Cuthbert conformed with the Synod of Whitby’s decisions in 664 about dating Easter and other contentious matters between Celtic and Roman Christianity.

Cuthbert caught and survived the plague. He twice became a hermit, the second time only a year before he died in 687.

He was buried on Lindisfarne Island, but his body was later placed in a shrine above ground there, where it remained for almost 200 years. When the monks fled Lindisfarne to escape the Vikings, they took St Cuthbert’s body with them.

He is reputed to have been buried eventually in Durham Cathedral and is that city’s patron saint.

He is said to have protected Durham from being bombed during World War II by causing a dense fog at the right time. 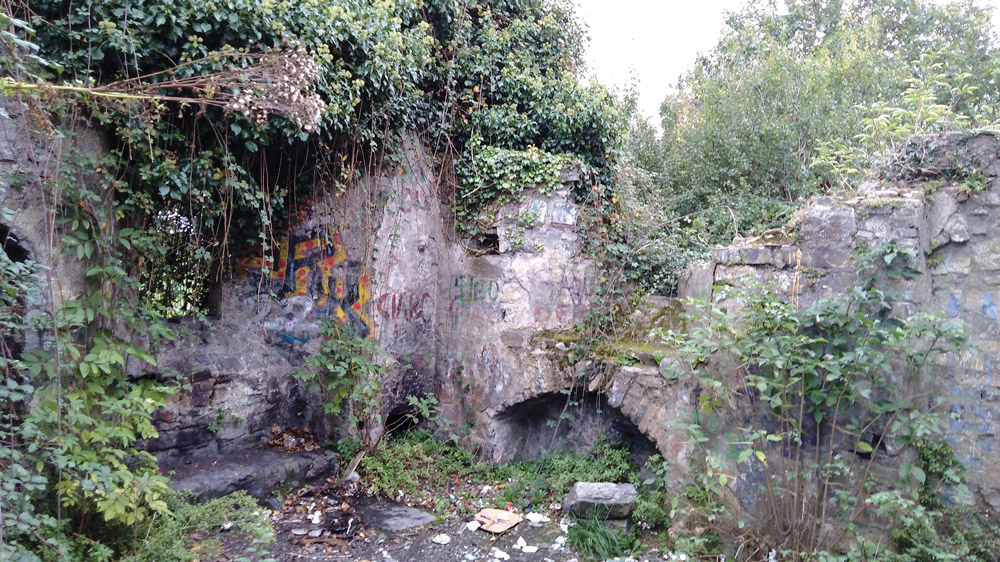 Graffiti and rubbish are in abundance

The earliest reference to St Cuthbert’s monastery found so far is dated 1186. This dainty church building was probably erected using local calp limestone, as with Clondalkin’s Round Tower. The church once served the smallest parish in the county.

The church, moat and graveyard are protected structures and about a thousand years old – roughly the same age as our Round Tower, give or take a few birthdays.

By default and on purpose, Mother Nature and unthinking human hands have been destructive instruments to St Cuthbert’s. The church is roofless, possibly for hundreds of years.

The leaves of many autumns descending onto the floor have become a tilth prized by any experienced gardener; if only the broken glass and litter could be removed from it, you could sell it for gold. Some house-holders leave rubbish at the site perimeter in the centre of the Park.

“Anti-social behaviour” is a catch-all phrase for the illegal activities carried on by the minority of yahoos who disrespectfully spoil things for everyone else.

Fires have been lit in the church, and some of its stone walls are blackened. Some wall stones have been removed to provide seating around the fires. Graffiti abounds. What a shame. Despite all this, the church retains its dignity.

Luckily, the skill of its original builders ensured that St Cuthbert’s Church still stands. We are fortunate there’s still something to protect. What building erected now will last a thousand years? 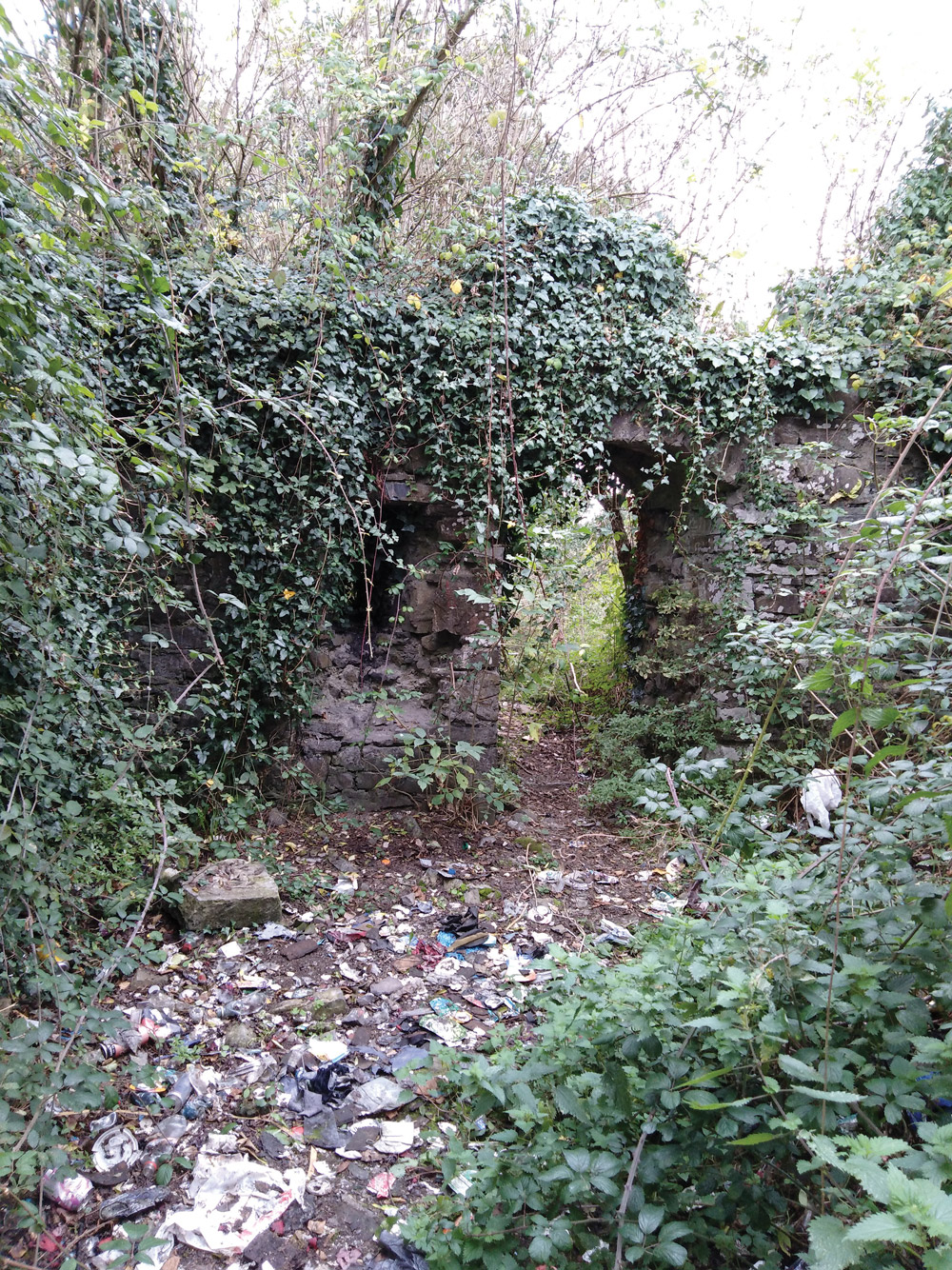 Last year, local people were brought together to construct a reliable document with our local heritage in view. The result was the Vision Document for Clondalkin Local Area. All our local county councillors support the document’s proposals.

It was presented to SDCC in the hope that it will be included in the upcoming Local Area Plan for Clondalkin, part of the County Council’s new Development Plan.

Finally, there is hope, good news.

Locals who have held St Cuthbert’s dear for many years will be pleased that our county councillors approved SDCC’s Part 8 Plan for St Cuthbert’s Park at their November 2022 meeting.

Check out the recording of the SDCC meeting online HERE.

The overall Plan for St Cuthbert’s Park is detailed and welcomed. In essence, and according to the Council Report and discussions, the vegetation in and around St Cuthbert’s monastery will be cut back. Then, the Council will carry out “a full condition assessment and may then be able to make further proposals for further funding in relation to that site which will tell us what’s there and what we can possibly do.”

The condition report will enable the Council to “look at whether or not we can go for further funding, or if there’s any avenues open to us in relation to that.” An archaeological expert will be on site during all of the improvements.

The Clondalkin area has already lost many of its heritage houses and buildings. Now, people who could have studied our heritage and social history can never fully appreciate what’s gone.

However, thanks to co-operation between local people, our County Councillors and SDCC, big plans are afoot and it seems St Cuthbert’s ancient complex will be saved.