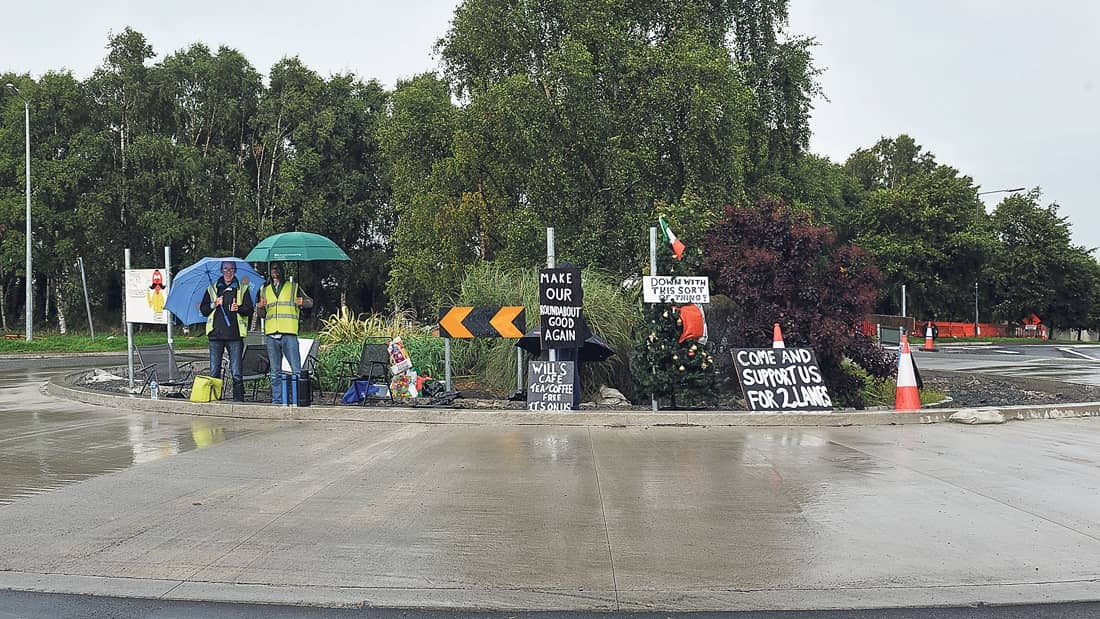 DAILY opposition to works at a busy junction have cost potentially tens of thousands of euro – after protests forced workers off-site in early July.

Works at the Woodford Hill roundabout in Clondalkin were paused on July 9 – amid claims by residents and local councillors that they were misled over the nature of works at Monastery Road Improvement Scheme.

Last week The Echo reported it was costing approximately €3,000 a day for works suspended. South Dublin County Council told The Echo the exact cost payable to the contractor as a result of the delay “will need to be determined as part of the claims negotiation process with the contractor.

“There is an agreed process for how this should be done and the cost payable will be determined at the end of the project,” said the council.

Although the majority of works are completed, protests have continued everyday at the roundabout since July 9.

Talks have been taking place over the last month between the council, Clondalkin councillors and Dutch Village Residents Association (DVRA).

The council said they have agreed to assess a number of changes that would “balance the needs of all road users and provide an improved and safe environment for vulnerable road users, as this roundabout was previously unsafe for such people.”

Cllr Francis Timmons (Ind) walked out of a recent online meeting with the council over a “threat” to recoup the money out of Clondalkin councillors’ pockets under the 2001 Local Government Act.

He claims the reduction of the laneway was not communicated clearly at local area meetings, nor is this aspect written in the public consultation plans.

The council previously stated drawings that went on display “clearly show one lane on all approaches and exits to the roundabout.”

“It is a sorry mess and I won’t be sad to see the back of it,” said Cllr Timmons.

“Last I heard is the council are bringing a report to councillors and residents, and we will take it from there. But we will have to agree on it.”

A key aspect to the conflict is the loss of a laneway at the roundabout and on the approach road to Woodford Hill, which residents say will drastically increase traffic congestion.

On the question of whether councillors would be liable for costs, the council told The Echo they are “working proactively with councillors and with local residents to agree a set of changes that are acceptable so that the roundabout scheme can be completed.

“Costings for reconstructing the original roundabout have not been undertaken and so it is not possible to provide an accurate cost for these works,” said South Dublin County Council.