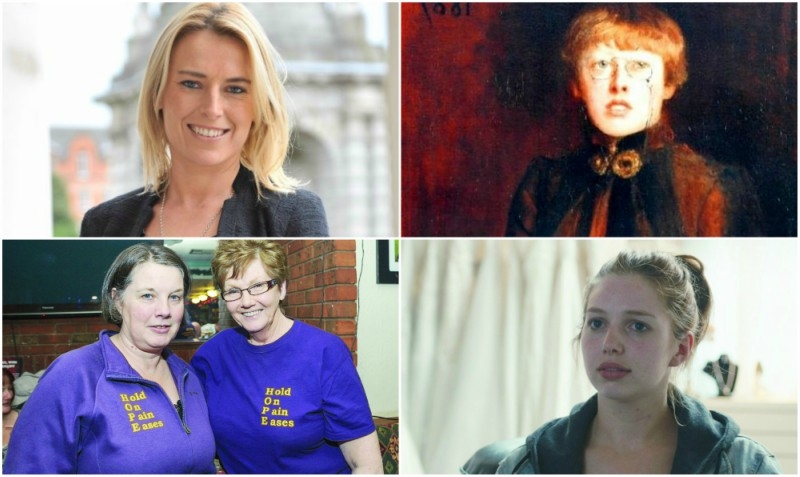 Today marks International Women’s Day, which recognises the amazing women in history and modern-day times who have made strides in their lifetime.

This day also highlights the inequality that many girls and women around the world still face.

To celebrate this event, The Echo has rounded up a list of some great local women making their communities proud through their contributions to society, politics and art.

This list is by no means exhaustive, so let us know who you think should be remembered as an outstanding woman.

Lynn Ruane’s story is well-known by now, but no less impressive than it was when Trinity College Dublin, and the country, was introduced to the single mother from Tallaght in 2015.

Lynn is from the Killinarden estate. She left school after becoming pregnant at 15. After returning to education through a programme for young mothers at Jobstown community college, An Cosan, she began a diploma in addiction studies at IT Tallaght at the age of 17.

From there, she worked tirelessly to develop addiction programmes for women in Bluebell, Dublin, which suffered severe cutbacks during austerity.

To further her work, Lynn gained access to Trinity College through the Trinity Access Programme, an initiative designed to improve access to the university from disadvantaged and minority groups in 2011.

In 2015, she ran for the presidency of the college’s students’ union on a platform of equality, access and inclusion and was elected, becoming the first female president in a decade and the first mature student president since the 1990s.

She announced her decision to run to represent Trinity graduates in the Seanad in November 2015 was elected to Seanad Éireann at the age of 31.

Lynn continues to be a passionate advocate for women and has worked for greater legal protection for victims of domestic violence.

When she died in 2013, Ann O’Brien was remembered for her devoted community work in Ballyfermot.

According to a tribute by the Ballyfermot Youth Service,  Ann worked for Dublin City Council as the head play leader in the Kylemore Playground and was “one of the most vibrant, happy and energetic community workers in Ballyfermot”.

She later worked in the Orchard Community Centre. Anne is remembered for “not being a 9-5 person” and could be found late at night working with young people.

Anne, who was not from Ballyfermot but spent several years working there, is remembered for being very caring young people in Ballyfermot and the need to provide services for them.

She was instrumental in the Ballyfermot Youth Service, organising many summer projects and holidays for young people and will be remembered with kindness and affection from her many friends in Ballyfermot.

Anne, and many other active women from Ballyfermot and Ireland, will be remembered tonight in a special exhibition for International Women’s Day in Ballyfermot Library at 5:30 on Thursday.

Katharine Tynan (1861-1931) was a poet, author and suffragette who left behind a large volume of work and a legacy as a central figure in Ireland’s Literary Revival.

Tynan was born on a 90-acre farm on a green belt between Tallaght and Clondalkin in 1861 as one of 12 siblings to parents Andrew Cullan Tynan and Elizabeth Tynan.

At the age of 17, she published her first book of verse, which was followed two years later by a novel.

Her wide volume of work includes 18 volumes of poetry, 105 novels and 38 other miscellaneous books, including five volumes of autobiography.

Tynan also worked for improved conditions for shop girls and single mothers, later joining the suffragette movement. President Mary Robinson unveiled a plaque in her honour in the pocket park in Tallaght village.

Tallaght mother Mary McLoughlin opened HOPE (Hold On Pain Eases) in June 2013 in response to a high number of suicides in the area.

HOPE offers support, counselling and a cup of tea to anybody feeling depressed, anxious or suicidal through a weekly drop-in centre every Tuesday from 7pm to 9pm in Trustus House on Main Road, Tallaght.

Because of her efforts to address the issue of suicide, Mary won Tallaght Person of the Year in 2015.

Since opening, HOPE’s demand has grown. The service will open a new office in Tallaght village this year, thanks to the support and fundraising efforts of the public.

Mary hopes to centralise their services and increase their opening hours with the new premise.

Grace is behind the Faces by Grace blog. The blogger, from Tallaght, has become a social media influencer through hard work.

Faces by Grace is a beauty, fashion and lifestyle blog. Grace said she began blogging full time following the massive success of her blog, but this was four years in the making.

Grace has recently become a mental health advocate and opened up about her struggles with anxiety. The candid blogger also famously snapchatted the delivery of her baby in 2016.

Rita Fagan is a St Michaels Regeneration Board community representative. A tireless activist in the Inchicore area, Rita fought to get people re-housed in Inchicore after the demolition of St Michaels Estate flats.

The long-awaited social housing regeneration project opened in 2014 with 75 new homes, but Rita continues to fight the good fight, particularly in her efforts to ensure elderly and vulnerable residents can secure accommodation.

According to her bio, Rita went to work in a sewing factory at 14-years-old. Through the 14 years there, she became active in the Trade Union Movement.

She is project director at the St Michael’s Estate Family Resource Centre working on the Women’s Community Development Project.

The Family Resource Centre was set up in 1987 to address the needs on the estate and the wider area in relation to poverty, drugs, violence etc.

Through this, Rita is committed to the struggle of working-class and impoverished women. The centre provides support for women facing domestic abuse and helps them access education programmes.

27-year-old Seana Kerslake has been making waves in the Irish film and television industry for the past number of years.

Seana is a familiar face at the Civic Theatre in Tallaght where she has starred in a number of stage productions.

The Tymon native earned rave reviews in the comedy, A Date for Mad Mary, in which she played a volatile, yet vulnerable ex-convict trying to find a date for her best friend’s wedding.

Most recently, Seana starred in the relatable RTÉ comedy-drama series Can’t Cop/Won’t Cope as Aisling, the archetypal country girl who moves up to Dublin and has to navigate “adulting” as a perpetually-broke millennial.

She is also starring in the upcoming adaptation of Dublin Old School, along with another Tallaght heavy-weight, Emmet Kirwan.

In 2017, Jones was invited to represent Ireland at the prestigious Venice Biennale.

The Fettercairn woman’s idea for Ireland’s entry was to create a fictional lost past where women held power through a film collaboration touching on the witch trials of the 16th century, the symphysiotomy scandal and the Repeal the Eighth abortion rights movement of today.

The artist has said that she loved growing up in “multicultural” Tallaght, where her working-class upbringing made her conscious of class and gender politics.