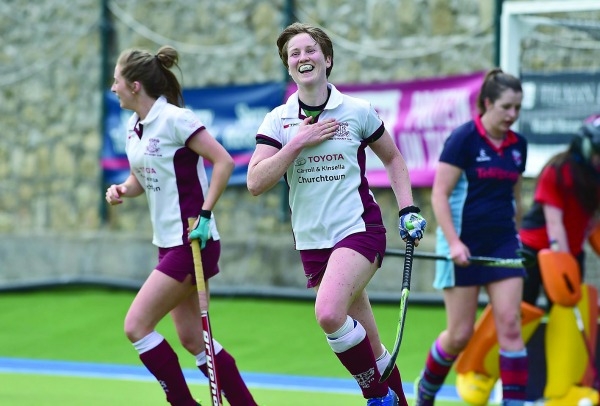 After topping Pool B with three wins from three the week before, the Beaufort side, last Saturday, beat Lurgan 3-1 in the semi finals before dishing out a 2-0 defeat to Belfast Harlequins in the promotion final the following day.

It capped a tremendous season for Loreto who had previously secured both the Leinster League Division One and Jacqui Potter Cup honours.

Yet they never lost sight of their main goal according to coach Paul Fitzpatrick who told The Echo “The main priority for us from the start of the season was to qualify for the EYHL, but to also win the Leinster League and Jacqui Potter cup was a fine achievement”

“And to get into the EYHL is not an easy process. We had five games in the last week and we were playing teams, some that we didn’t know.

“Lurgan are the Ulster champions and we were a bit tense in the first half against them, but that was because we didn’t really know what they were like.

“But once we got the measure of them we pushed on in the second half.

“We had played Belfast the previous week in the round robin league section and that was to our advantage because we could counteract the way they played and contain a lot of their big players.

“Looking back on the season now I think the real turning point for us was when we won the Jacqui Potter Cup because I think people forget that Loreto hadn’t won that since back in 2004” he pointed out.

Loreto completed their march to the top ranks of Irish women’s club hockey in convincing fashion with goals from Niamh Small, Carly Baker and Hannah Matthews seeing them comfortably past Lurgan.

This set them up for a clash with a Belfast Harlequins outfit they had beaten 3-0 the previous week.

They took the lead eight minutes into the second half of their following encounter last weekend when Ali Meeke tucked away a loose ball that was the result of Jade Lamont’s double-parry from Lena Tice’s efforts.

The insurance score came 11 minutes from time when Meeke fed Jessica McGirr’s whose wicked delivery in was steered home by Kate Crotty.

The win sets Loreto up for a season amongst the big fish of the EY Hockey League and Fitzpatrick believes his side have the ingredients for a solid campaign.

“We have 12 players who are under 23 and many of them have grown to become an integral part of the team.

“Many of the players are in their first and second seasons competing at this level and so the EYHL will be a big step up for them next year.

“The likes of Hermes and Pegasus have players with six to eight years experience playing at this level and that’s very important to have, but we hope to be competitive.

“It will take a bit of getting used to but we hope to be pushing on strongly” he concluded.