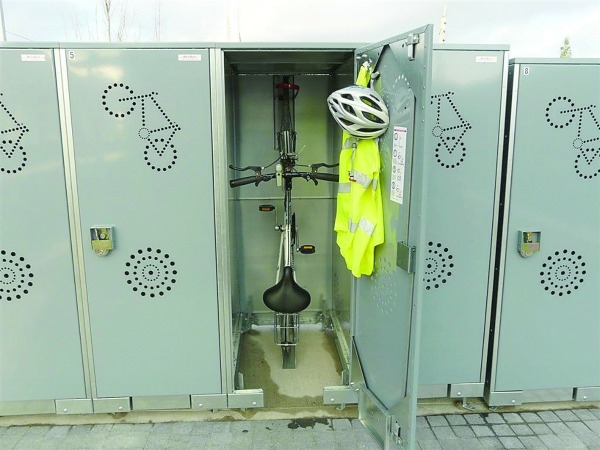 Installed at Lucan Road near Woodies by the council for over €12,000 in December, the lockers are not having the desired uptake from commuters.

Richard Strahan, who operates the citywide Bike Locker initiative, says SDCC have conducted a lot of research with regard to travel times from Lucan into the city.

Mr Strahan said: “Getting people to change their habits takes time. Getting Lucan residents to leave their car at home and take the bike out of the garage is a big mind-changer.

“If you live in the Lucan area, the fastest way to get to the city is by Dublin Bus – who run Expresso buses from near Woodies that rarely stop on their way to O’Connell Street and UCD.

“This allows cyclists to ride through the traffic in the Lucan area, put their bike in a locker and take the bus, saving time. Lockers have room for helmets, wet gear, as well as your bike.”

In response to Cllr O’Toole’s motion at the Lucan ACM, a spokesperson for SDCC said promotion of the bike lockers has been “ongoing.”

“Dublin Bus have recently included information on their website which has a huge number of users and the provider has been actively promoting the facility,” said the spokesperson.

“It is intended to have additional targeted promotion as part of the launch of Bike Week 2016 in May and during the week itself June 12-19.”