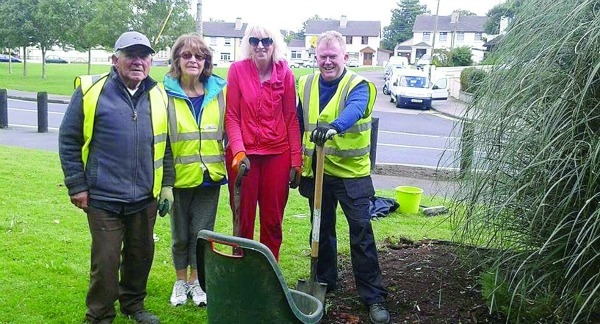 He said: “We were up four points on last year’s. We are happy with the results. We are pretty close to 300 now. Letterkenny won the overall award with 323.”

PRO with Clondalkin Tidy Towns, Ronan Connolly told The Echo: “We are delighted. This is an amazing achievement once again and we would like to thank each and every one of you who has contributed.

“We are continuing to grow from strength to strength and with an enthusiastic committee and volunteers under the expert leadership of Pat O’Sullivan, things can only get better for us.”

The ‘Clondalkin Village Summer Competition’ awards night will be held on Friday, October 16 at 8pm in Round Towers GAA Club where the group will be announcing the winners of the ‘Best Front Garden’, ‘Best Shop Front’ and ‘Best Estate Entrance’ competitions.

The Cherry Orchard Tidy Towns Committee were also very happy with their results. A spokesperson for the Committee told The Echo: “This year we had Elmdale, Cherry Orchard Community Garden and St Ultan’s School, as well as our established groups on Croftwood Park, Grove, Drive and Gardens and the hard-working group on Cloverhill Road, Raheen and Le Fanu, who all played a big part in our projects and events.

So it has come as no surprise that we gained 17 points on last year’s results. Cherry Orchard scored a fantastic 207 points in its second year in The Tidy Towns Competition.”

The spokesperson said they wanted to thank everyone who helped out. She said: “Thank you to everyone who is doing something to improve our area – from the students at St Ultan’s, the residents’ groups who take part in Tidy Towns, service providers in the area, Cherry Orchard Childcare, The Bungalow, to name a few. Cherry Orchard has amazing residents and wonderful people all with the same goal, to be a part of a great community”.

Local TD and Minister for Justice, Frances Fitzgerald congratulated the Tidy Towns groups throughout Newcastle, Clondalkin, Palmerstown and Lucan on their fantastic work and results in this year’s competition.

She said: “The various Tidy Towns groups based in Lucan also scored impressively, with Griffeen increasing their points by 10. The Lucan Tidy Towns group scored high again, and particular note was given to the involvement of local schools including transition-year students from St Joseph’s.”