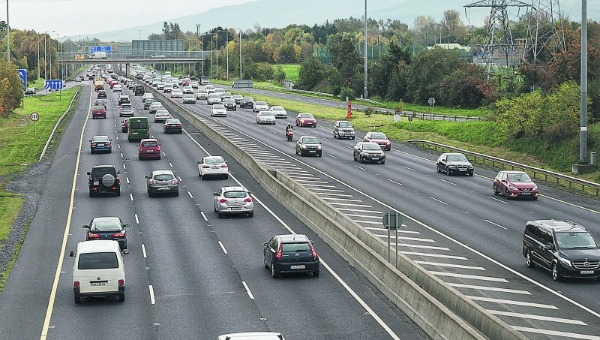 KNOWN as Dublin’s biggest car-park, the M50 has reached capacity, with 375,000 ‘unique’ journeys being taken each day by people living and working in communities around the motorway – who are jumping on and off in an attempt to avoid traffic on local roads.

According to figures provided to The Echo by Transport Infrastructure Ireland (TII), the number of vehicles travelling through the eFlow toll plaza on a daily basis is expected to hit 140,000 by the end of 2016 – an increase of 55,000 when compared to August 2008, when the toll plaza first opened.

These are the confirmed figures from the toll plaza however, the figures for ‘unique’ journeys, motorists who use the M50 for two or less junctions, are pretty staggering, with TII confirming this figure to be around 375,000 daily.

With support from local authorities, TII tracks the number of vehicles at junctions, in areas such as Tallaght, Clondalkin and Lucan, through the use of traffic counters.

A spokesperson for Transport Infrastructure Ireland (TII) told The Echo: “There are around 375,000 unique journeys daily, people using the M50 for less than two junctions – basically jumping on and off.

“It’s people kind of using the M50 as a rat-run in an attempt to avoid traffic on local roads.

“However, this works vice versa with people also hopping off the M50 to avoid delays, going onto local roads and then coming back down onto the M50 at a later stage.

“The M50 has reached capacity and people are just looking for alternatives.”

He added: “We’ve reached breaking point on the M50, especially at rush hour and at specific junctions.

“This is creating backlogs and people are manoeuvering around that, with traffic spilling out onto local roads and vice versa.”

Data compiled by TII shows that peak times on the 40km corridor are spreading, with peak time now lasting for eight hours each day, with morning peak 7am to 10am and evening peak 3pm to 7pm.

“We can’t make the M50 any wider or turn it into a double-decker,” TII told The Echo.

“This breaking point is all a result of a good news story, a growth in economic activity.

“However, by 2019 we will be managing the flow of traffic and the speed by directly communicating to motorists in real-time.

“For example, if there is an accident along the corridor we will drop the speed rate, slow traffic down to maybe 60km or 70km to allow for a flow of traffic instead of people jamming on their brakes.

“We’ve also elongated the merging lanes which allows people to get up to speed with traffic already on the M50.”

TII has also stressed the need for a focus on public transport, including integration of the bus service and Luas park-and-ride facilities.

The M50 came to a standstill last week when a number of collisions caused up to one-hour delays, with 120 serious accidents, on average, happening on the M50 every month.