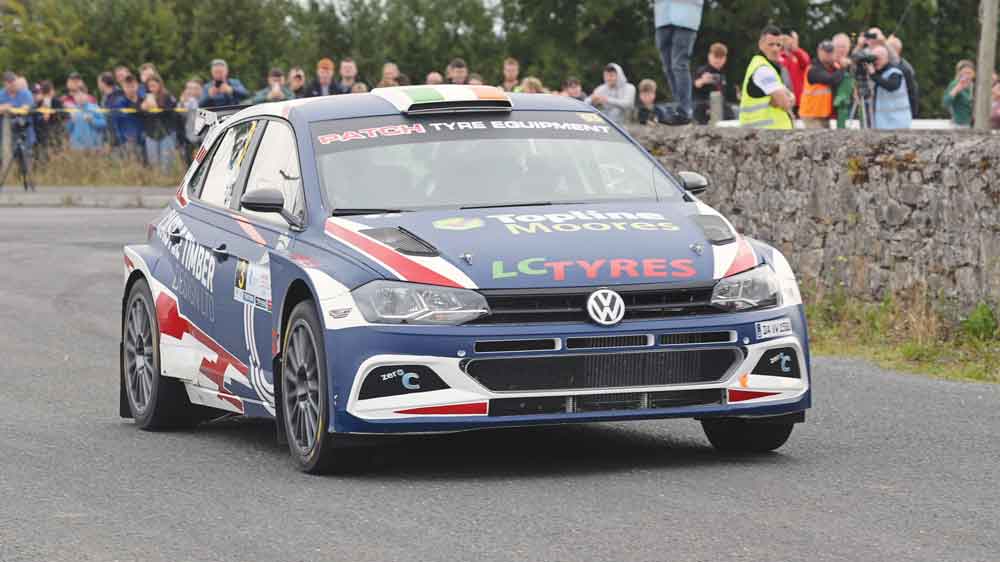 GARETH MacHale followed up on his second-place finish in last month’s Stonethrowers Rally in Tipperary with a victory in the Bluebird Care Galway Summer Rally last weekend.

Combining with co-driver, Brian Murphy, the Rathcoole man landed his first win since way back in 2010 when he contested the Cork ‘20’ International Rally.

Having been given the opportunity to return to racing in this year’s Motorsport Ireland National Rally Championship, MacHale has served up some very encouraging performances in his VW Polo Gti R5, none more so than in Galway.

While his choice of tyres had been based on the hopeful prospect of a stronger run on the longer second stage, MacHale had seen any such possible advantage negated after that phase of the rally was cancelled.

It meant the Dubliner trailed early leader, David Guest of Dunmanway by 5.1 seconds at the close of the third stage, but he continued on to set the fastest times in all but one of the remaining five stages and finish 15.2 seconds clear of eventual runners-up Andrew Purcell and Andy Hayes.

“The car was great” a delighted MacHale told The Echo.

“That was our fourth rally in the championship and we were very happy to get on the top step.

“I picked a harder tyre because the second stage was the longest one, just under 18km long, but unfortunately they had to cancel that stage for whatever reason and our tyres were too hard for the shorter stages.

“But overall the car handled very well and we were very happy with the weekend.

“We just came back this season. It’s been 12 years since we’ve really done anything.

“It was great, because when you’ve been out of it for so long, it can take some time to get back up to speed, so everything seems to be going in the right direction.

“Really this is a build-up for next year when we hope maybe to compete in the 2023 Tarmac Championship” he said.

MacHale may well opt to bring the curtain down on competition in 2022 with the Harvest Rally in Donegal in October before hopefully taking his place in February’s Galway International Rally which marks the start to the 2023 Irish Tarmac series.