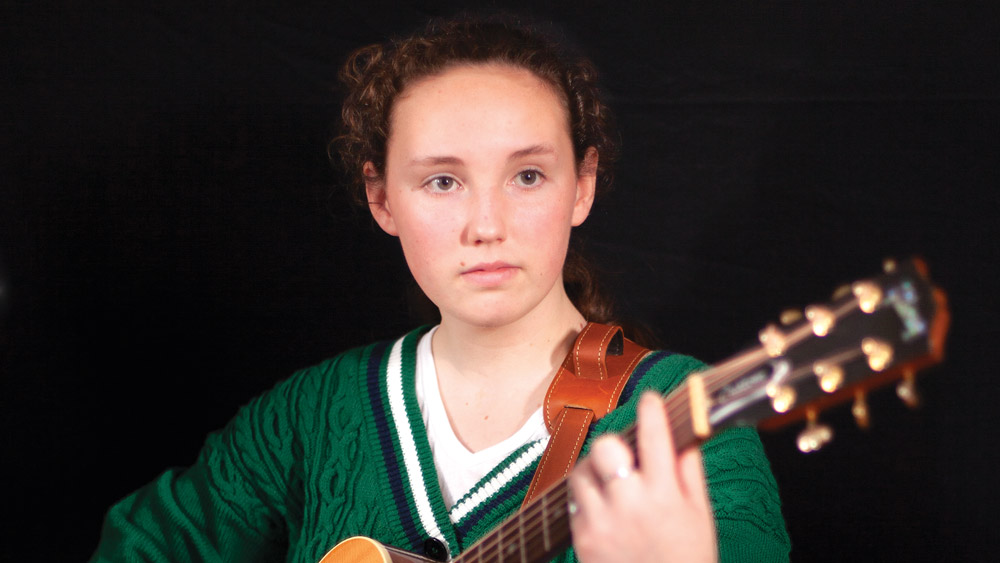 Sadhbh Keane’s emotive new single, ‘Main Character’, is dedicated to the memory of her late grandmother, Jo Keane, who passed away last year.

Jo was well-known in Clondalkin – she was a teacher in Coláiste Chillian and a prominent advocate for the revival of the Irish language in the area.

However, 15-year-old Sadhbh’s song delves into her moving memories of time spent with her grandmother and the joy that she carried with her throughout her life.

Sadhbh, who regularly busks on Grafton Street and recently played her debut headline show, told The Echo about the development of ‘Main Character’ and her strong links to Round Towers GAA.

You recently played your debut headline show in the Round Tower GAA Club, what was that experience like for you?

Amazing! It’s very hard to describe how much fun it was and how much of a good atmosphere there was on the night.

My favourite moment was when I sang my last single ‘Less Than Lovers’, and what seemed like the whole room sang it with me.

So many of my friends and family were there, loads of young people from Round Towers teams . . . it was class.

Some people even came along who knew me from busking on Grafton Street. The support from South Dublin County Council and the Department of Arts allowed us to have really professional and top-class production.

We built a two-foot stage, I was supported by a full band, and we had superb sound and lighting. So, it was better than I could have imagined.

I am very grateful to everyone who turned up to support me. We had a full house there on the night, so I really hope we can do another one soon.

As your family has strong links to the club, did the venue have a particular resonance for you?

Because my mam and dad have always been involved with Round Towers I have been in and out of the clubhouse since a very young age, so it was great to have people come and see me perform there.

Apparently, I started in the Towers Óg nursery at three-and-a-half years old!

Everyone involved in the club was very supportive and helpful in making the gig a reality.

Your new single ‘Main Character’ is about your nana, Jo Keane. What was it about her that inspired you to write the song?

First and foremost because she was my nana and was always a huge presence in our lives.

I heard the phrase ‘main character’ shortly after Nana Jo passed away and the song came to me in a flood of words, and it just made sense.

The whole song is about looking back over the good times we shared with Nana Jo.

She loved parties and get-togethers, she always loved telling stories that meant more than you initially thought.

Can you tell me a bit more about the song?

The song also touches on the tough parts. Nana Jo died during Covid, so we had a long time where we could visit but we couldn’t hug her, although we were able to in the end, thankfully.

Nana Jo had cancer and one of the cruel things I observed was that time with cancer was actually bringing the ending closer.

I wrote the line ‘When I see that time kills you’, in my opinion it’s the most poignant line in the song.

What feedback has your family given you about the song?

Everyone really likes the song. It means a lot for me, and hopefully for my family, to have it released for others to listen to.

The song was written from my perspective, but I’m sure my family know exactly the good times with Nana Jo the song remembers.

The single is a live acoustic version, not heavily produced. I think everyone likes that too, it suits the song and the emotion of the song.

We all still feel a bit raw, I guess.

What do you think your nana would think of the song?

I’m not sure, actually! She was very modest and humble. I think she would pretend to be cross at first, but secretly love it.

‘Main Character’ is out now on all streaming platforms.