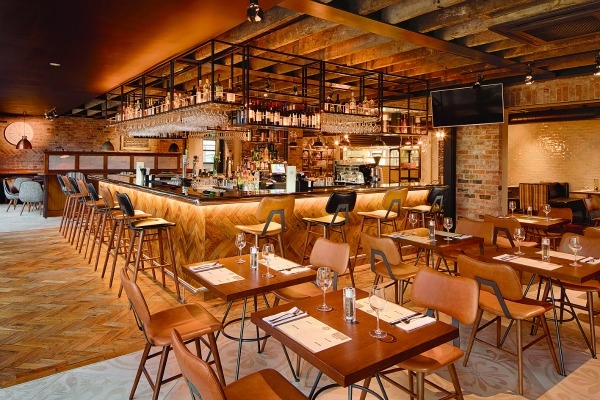 McGettigans Cookhouse and Bar opens for business in Citywest

A NEW four-star hotel venture and cookhouse and bar in Citywest has to date created 50 jobs, with continuous growth and development expected over the coming months.

In December 2014, the McGettigan Hotel Group took over the Maldron Hotel in Citywest, just off the N7, and fully refurbished and upgraded it from a three-star hotel to a four-star.

Now, the group has transformed the Kingswood House, located on the grounds of the 129-room hotel, into a stylish, open kitchen, restaurant and bar, which boasts an extensive seasonal menu that focuses on using fresh produce from local suppliers.

The cosmopolitan cookhouse, which is run by head chef Pat Brophy, formerly of The Storehouse in Naas, offers a range of steaks, duck cassoulet, roast chicken, pork saltimbocca and the Cookhouse trademark selection of gourmet burgers, with fish and shellfish including fish chowder, tiger prawn tempura and pan seared king scallops also on the menu.

Other dishes such as butternut squash and wild mushroom risotto, superfood salads and pizzas are also made fresh on site, with sliders and antipasta also available for more casual dining or to enjoy with a glass of wine or craft beer.

Family-run, the McGettigan group has three cookhouses and bars and nine hotels in Ireland, with 11 gastro pubs across Europe, the Middle East, Southeast Asia and America.

Seeing the potential of locating a new business in South Dublin County, and in Citywest which is surrounded by thousands of households, the Citywest Business Park and national road routes, Brian McGettigan, Chief Executive of McGettigans Cookhouse and Bar, said: “The McGettigans Cookhouse concept has been very successful since we first opened in The North Star Hotel in 2013.

“We opened our second cookhouse in 2014 in the Ambassador Hotel in Cork and it is extremely popular and doing very well with lots of local trade and fantastic feedback.

“Both cookhouses in Cork and Dublin are exceptionally busy with lunchtime business and we believe that the Cookhouse here in Kingswood will be extremely busy all day long.

“This is our largest and most exciting venture to date as a stand-alone eatery well located right beside the expansive Citywest Business Park and the N7.

“We began with a very strong design and clear vision of what we wanted to achieve. The design is refreshingly different creating an urban New York loft style eatery with a luxurious style.”

The group also caters for parties and functions including Communions and Confirmations in its series of private event spaces, including its newly opened Locke Suite which has its own dedicated kitchen and staff, a 200sq foot balcony and floor to ceiling windows – offering a local, alternative venue for corporate events or bespoke weddings.