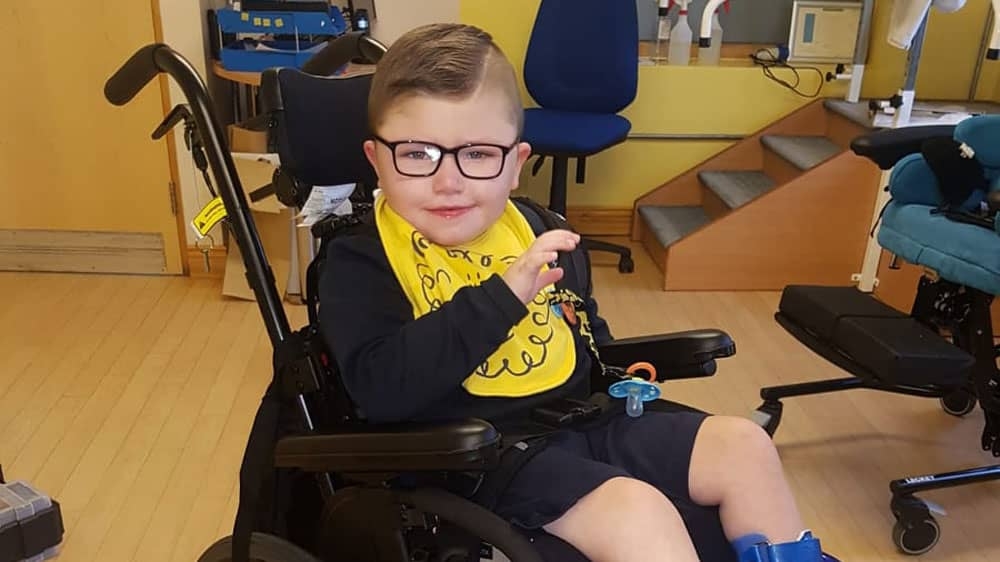 A FUNDRAISING campaign has been set up to configure a home for a young boy who has been called a “medical mystery” due to his undiagnosed condition.

5-year-old Sean Grant is known as a S.W.A.N child (Syndrome Without A Name) as he has never been diagnosed with a particular syndrome although he has been diagnosed with numerous complex health issues such as Developmental Delay, Hypotonia, Microcephaly, Severe Obstructive Sleep Apnea, Epilepsy and is P.E.G tube fed.

Sean Grant’s family are looking to configure their home for Sean, pictured with his parents Paula and Sean Sr

With an infectious smile and bubbly personality, Sean seems like any boy his age, but he is what is known as a “medical mystery”.

Following this, Sean failed to reach any milestones and Sean’s parents Paula and Sean and doctors grew concerned.

“Over time with lots of tests and several hospital admissions, more new health issues arose with Sean. Each time we left the hospital we were armed with new medication and new pieces of medical equipment.

“Furthermore, Sean struggled to gain weight which weakened his immune system and left him more vulnerable to gaining infections and due to his poor health, it would be more difficult for him to fight them off,” says Paula.

“He has had every test – between Temple Street and Our Lady’s they have done every test possible, and they just don’t know.”

Today, although he is thriving and getting stronger, Sean is unable to walk or eat by himself and he is peg fed through his tummy tube.

He is also nonverbal and has troubles with sleeping due to him needing oxygen at night for his severe obstructive sleep apnea.

Due to limited space in the house, Sean still sleeps in his mam and dad’s room in a toddler bed and his parents have to carry him up and down the stairs.

“He is turning 6 now in a few weeks and it is a health hazard carrying him up and down the stairs and I can’t even bath him anymore, he is a good-sized little boy,” explained Paula.

“Just space-wise the amount of equipment we have and as he is getting bigger the equipment is also.”

A fundraiser has been set up in hopes to raise money to adapt the house to Sean’s needs – building a specialised downstairs configuration including an accessible bathroom with a hoisting system and storage for all his medical equipment.

“We need a room alone just for his equipment – and for him to get around the house independently, Sean can’t use his walker in the house because there is nowhere for him to go with it.

“The work is not just for a child in a wheelchair, because Sean is a little more complex because he can move about, but he can’t walk.

“We are looking for €125,000. My husband Sean and I have saved some money. We were due to get married, but we cancelled our wedding – Sean comes first. It is all for Sean and to grow his development because he is getting there.”