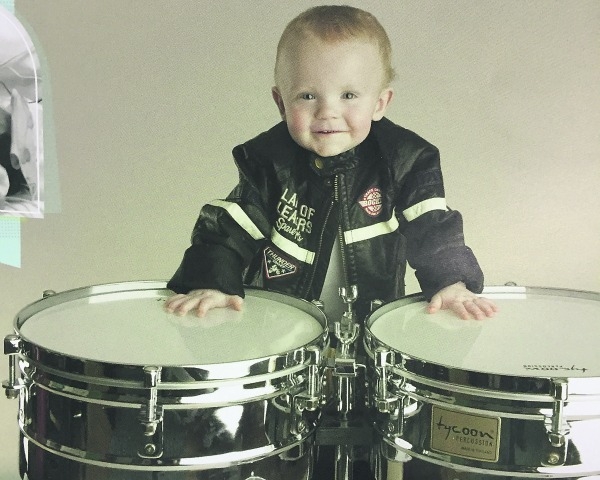 IN JANUARY 2014, Seán Brennan entered the world 14 weeks early, weighing less than a bag of sugar.

Weighing just 1lb 11oz, Seán’s sudden arrival marked the beginning of an incredibly traumatic period for his parents Edel and Micheal – who watched their tiny son spend the first 14 weeks of his life in hospital, eight of which were spent in intensive care.

However, today, the miracle Tallaght tot is a normal, healthy 22-month-old, full of mischief and something of a local celebrity – after he was chosen to feature in the Friends of the Coombe charity calendar.

The calendar aims to urgently raise €70,000 to buy four CosyCot infant warmers essential to the intensive care of some of Ireland’s most premature and fragile infants.

Sean’s mam Edel Greene, who lives in Balrothery, said: “The staff at the Coombe were absolute angels. They were like family. They didn’t just look after Seán, they looked after us all.

“Seán had so many setbacks, but we always felt like the staff put that extra bit of effort into him, which made a very hard situation an awful lot easier.”

On the 26th week of her pregnancy, Edel attended the Coombe after feeling a little uncomfortable in work.
“I didn’t think there was anything to worry about,” said Edel.

“As far as I was concerned, I was going to the hospital for some re-assurance and all was well.

“When I saw the doctor, I was already in labour. All hell broke loose and the doctors did all they could to try to get me to hang on until after the weekend so that they could give me steroids to help the baby.

“Things seemed to settle down over the weekend, but by Monday labour had started again without me realising it.

When they took me for a scan Seán was almost ready to be born and by the time they got me to the delivery suite, he had turned sideways which meant we had to go to theatre for an emergency C-section.”

Sean was brought straight to the neonatal intensive care unit in the Coombe where his breathing was supported.

However, on day three, Seán took a turn for the worst and was rushed to Crumlin Hospital – with his heartbroken parents getting their son christened while waiting for the ambulance.

Despite only being given only 30 minutes to live after surgery in Crumlin, Seán made it to four hours and then started to rally, returning to the Coombe six days later – where staff helped him to put on weight and fight a number of infections.

Edel said: “To look at him today, you would hardly believe how much he has gone through. He is a normal healthy little boy who hasn’t stopped running since he started walking. I think he is making up for lost time.”

Money raised by this year’s calendar will help enhance the care of extremely premature babies, like Seán, in the Coombe.

One of the largest and busiest providers of women and infants’ healthcare in Europe, the Coombe Women and Infants University Hospital last year delivered more than 9,000 babies, 1,000 of whom were admitted to the neonatal unit.

The 2016 Friends of the Coombe Calendar is available to purchase now for €10. To buy a copy visit www.friendsofthecoombe.ie, email friends@coombe.ie, call 408 5539, or visit the hospital reception desk.

The photography for the calendar was donated by award-winning photographer, Tanya Crosbie, founder of Giggles & Smiles Photography.