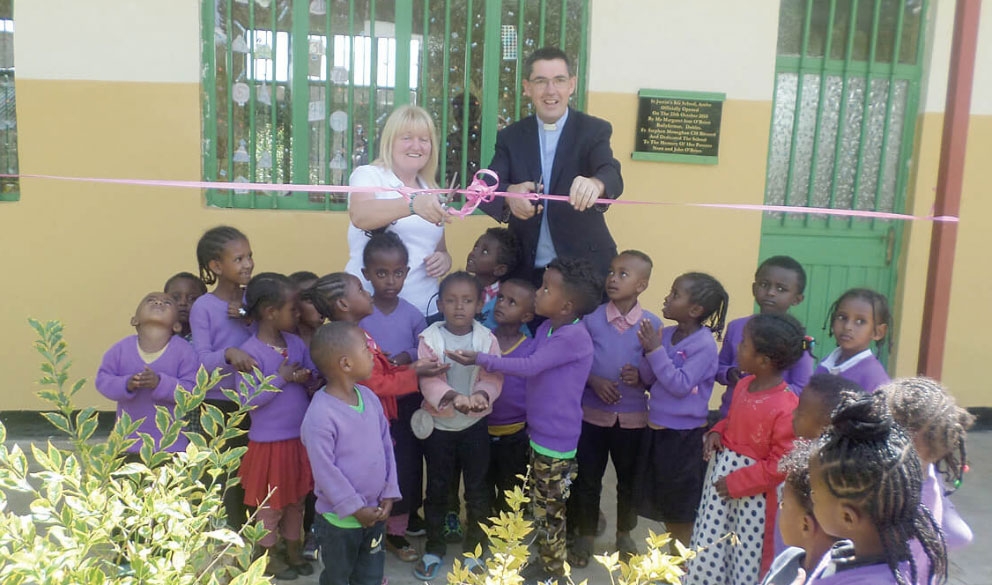 A TRAVELLER woman from Labre Park who recently established a school in Ethiopia, has expressed her thanks to parishioners in Ballyfermot for their support in delivering the project.

Margaret O’Brien first went to Ambo, Ethiopia, in 2010, as part of a group of Travellers invited to the African country by Fr Stephen Monaghan.

Margaret O'Brien and Fr Stephen Monaghan cutting the ribbon at the opening of the new school in Ambo, Ethiopia

She has been fundraising for the Vincentian Lay Missionaries (VLM) since 2003, by taking part in the Women’s Mini-Marathon, but was shocked to discover the school arrangements on her 2010 trip.

“The children were all out in the open, a teacher was teaching them under a tree,” said Margaret.

“Ambo is based in the countryside. When the water stops, it all stops and it is very hard to get food. But they are so happy over there, even though they haven’t got much.”

After witnessing the conditions in the village, Margaret doubled up her fundraising efforts upon returning to Ballyfermot.

With support from Fr Richard Delahunty and generous gate collections by parishioners at Our Lady of the Assumption Ballyfermot, she has been able to build a school for the Ambo community.

On her last visit to Ethiopia in October, Margaret officially opened the facility, dedicating the school to the memory of her late parents, Nora and John O’Brien.

However, Margaret plans to continue her work, by opening a dining hall for children, and get sponsorship for 10 kids from the local leprosy village to attend the school.

Our Lady of the Assumption Ballyfermot said the school is so popular that the local government have listed it as a model school which should be replicated in other areas of the country.

Margaret said: “I want to thank Fr Richard, Fr Stephen, all the priests in the diocese, and all the people of the Assumption parish and Ballyfermot for their support over the last 15 years. I’m hoping to get back out there next year.”