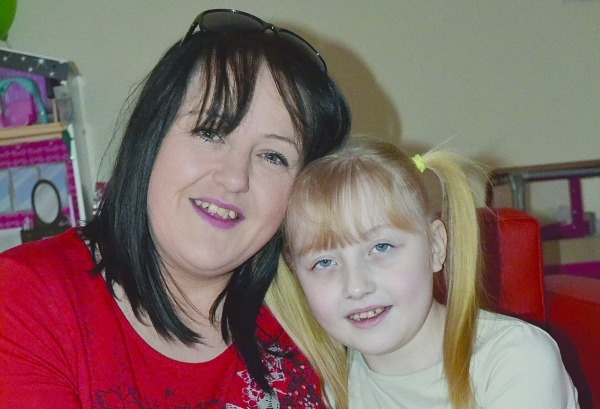 A mother has sent a moving, open letter to the Minister for Health seeking the approval of a cystic fibrosis drug that could improve and lengthen the life of her daughter – and hundreds of other Irish patients.
Saoirse Brophy (8), a Second Class student in Solais Chríost in Belgard, Tallaght, was diagnosed with Cystic Fibrosis (CF) after she was brought to Our Lady’s Children’s Hospital Crumlin with suspected swine flu at the age of two.

An inherited chronic disease, Cystic Fibrosis affects the lungs and digestive systems of about 1,200 children and adults in Ireland, with the condition causing the body to produce a thick and sticky mucus which clogs the lungs and leads to life-threatening lung infections and serious digestion problems.
For Saoirse, daily life includes physio and six different types of medication before she leaves the house in the morning, the ingestion of special enzymes before she eats anything throughout the day, followed by more medication and time on a nebuliser.
However, there is an FDA-approved combination therapy called Orkambi which Siobhan believes will enhance Saoirse’s quality of life and increase her life expectancy – a drug which Cystic Fibrosis Ireland is also campaigning for.
According to CF Ireland, the drug has the potential to lengthen lives, increase quality of life and delay the need for lung transplantation, with Orkambi the first drug to impact on the underlying cause of CF for 60 per cent of the CF population in Ireland.
Siobhan told The Echo: “There are different strains of Cystic Fibrosis and Orkambi has been designed for the strain that Saoirse has.
“It really annoys me that our government will not fund this drug, which could result in my daughter living with CF rather than dying from CF.
“People with CF and their families currently have this life expectancy hanging over their heads, and it doesn’t need to be like this.
“Once again, our health system is coming down to one dirty word, money.”
In her letter to Minister Varadkar, which has also been shared on Facebook, Siobhan asked the Fine Gael TD to help her child breathe and to fill her lungs, desire food, run with her friends and have a full night’s sleep.
“The Minister for Health and HSE has a lifeline to throw us, but as always CF patients and their families have to fight for everything,” Siobhan said.
“It happened before where we had to fight for a drug to be approved and then at the last hour, acting like heroes, the Government approved it.
“We don’t need heroes, just the drug.”
The HSE previously stated that the Government would not be funding Orkambi.
However, after a backlash, Minister Varadker announced that the drug would be assessed.
In a statement to The Echo, the Department of Health said: “The Minister for Health has had several meetings with Cystic Fibrosis Ireland to discuss issues affecting CF patients, and will do so again later this month.
“Decisions on which medicines are reimbursed by the taxpayer are made on objective, scientific and economic grounds by the HSE on the advice of the National Centre for Pharmacoeconomics.
“They are not political or ministerial decisions.
“Orkambi is currently being considered by the HSE under the national medicines pricing and reimbursement assessment process. The assessment process is ongoing.”
For further information and support visit www.cfireland.ie