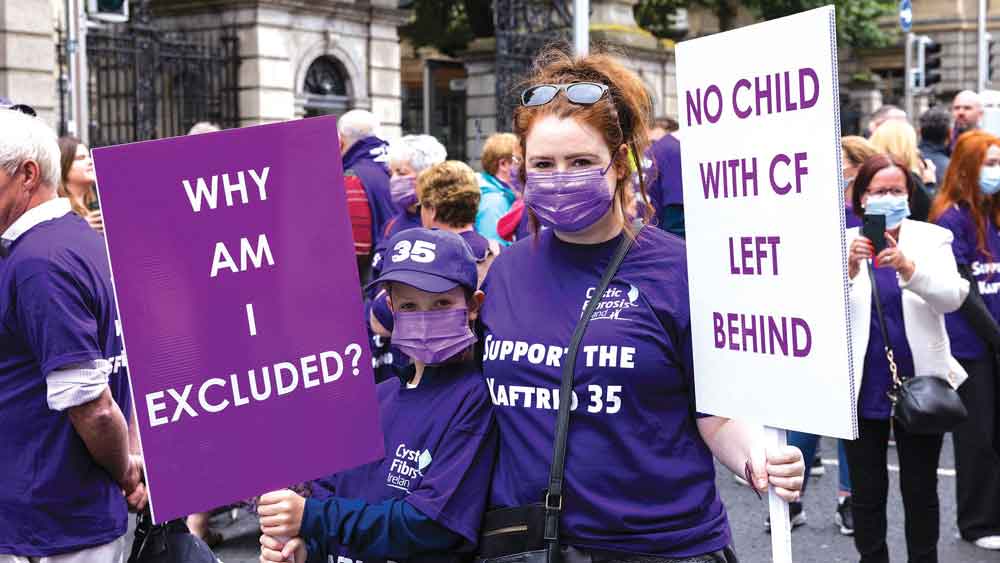 Caroline Poynton with her Matthew outside the Dáil

Mother pleads for access to ‘life-saving drug’ for son

THE mother of a 10-year-old boy with Cystic Fibrosis (CF) is appealing for him to get access to a “life-changing drug” called Kaftrio that could alleviate many of his symptoms.

Caroline Poynton and her son Matthew Kennedy, from Ballycullen, are one of the 35 families who were previously in line to receive Kaftrio, before being told last May the plans had stalled.

Matthew, and the 34 other children aged between six and 11 years old, have a rare gene that has caused them to develop CF.

According to Cystic Fibrosis Ireland, Vertex Pharmaceuticals, which makes Kaftrio, is in a dispute with the HSE about whether the genotype affecting the 35 children was included in the original deal for the drug.

Caroline and Matthew, along with many others who have been affected by the impasse that has occurred after expecting to receive Kaftrio, protested outside Leinster House earlier this month.

“Kaftrio would change Matthew’s life dramatically,” Catherine told The Echo. “It would open so many doors for him.

“We could go out and enjoy our lives and do so much more. I feel like his nurse, and not just his mam, but I would like to be his mother rather than his nurse.

“We’re just managing the symptoms of CF and trying to alleviate them. Matthew has problems with mucus and his sinuses.

“He has to have a high salt diet, because his body doesn’t absorb salt . . . but Kaftrio would treat the CF gene he has.

“All we’re doing is fighting his symptoms – it’s a constant battle that starts over and over again, but Kaftrio would stop that.

“We’ve been told by people who have taken the tablet that it’s changed their life.”

Caroline had expected Matthew to receive the drug, which she said would’ve alleviated her son’s symptoms and she hoped would enable her to return to work as she wouldn’t need to be his full-time carer anymore.

However, last May, the 35 families received the devastating news that their children would not receive the drug, causing them to develop a campaign which led to a protest march last week.

When the families and their supporters brought their campaign for the ‘Kaftrio 35’, as described by CF Ireland, to Leinster House, Senator Micheál Carrigy raised the issue in the Seanad.

“That treatment is there, it’s accessible, other children are receiving it, but these 35 kids are not getting it, and I don’t think that’s acceptable.”

Philip Watt, CEO of Cystic Fibrosis Ireland, said: “Until there is a resolution to this Boston/Dublin stand-off, the healthcare of the ‘Kaftrio 35’ remains compromised in a dispute not of their making and which is increasingly raising major ethical and human rights concerns as 140 children gained access in May 2022 and 35 children remain excluded.

“It raises the unwelcome prospect of parents being forced to consider taking legal action in future because their children are being denied access to healthcare available to all other children and adults with CF, including those in the same age group in Ireland.”

He added: “Cystic Fibrosis Ireland continues to lobby the government and Vertex Pharmaceuticals to resolve this dispute.

“We have again written to the Minister for Health and to the CEO of Vertex to urge compromise. Independent arbitration is one solution that could quickly and fairly resolve the dispute, with the goodwill of both parties.”