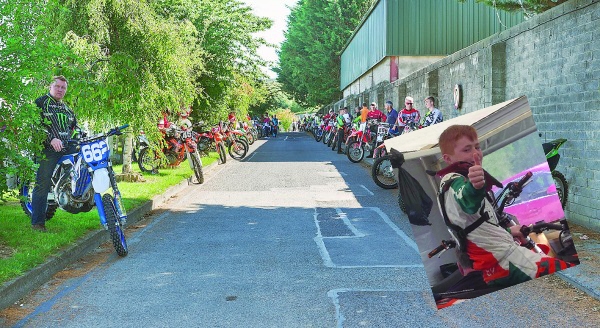 THE song ‘Somewhere over the Rainbow’ filled the Bohernabreena hills on Monday, when the coffin of 13-year-old Daniel Sheridan was brought into St Anne’s Church.

Daniel tragically lost his life after a motocross accident in Derry last Thursday, August 25 – the day before the young teenager was due to start first year in Kingswood Community College.

The family, who are well-known in the motocross world, were on holiday at the time of the accident, which happened at a track on the Seacoast Road in Limavady.

It is believed that Daniel and his brother Jake were both out practicing when they collided.

Despite hundreds turning out to remember Daniel last Thursday, Bohernbreena was still with grief as mourners of all ages gathered to say goodbye to a young lad who, known to friends as ‘Dano’, lived every minute.

Daniel’s motocross friends formed a Guard of Honour at the church gates, with bikes also lining the avenue to Daniel’s resting place in Bohernabreena Cemetery.

During the service, which was led by Father Micheal Murphy of the Kingswood and Kilnamanagh parish, symbols of Daniel’s life were brought to the altar and included a pair of his motocross boots, a jersey and football from St Jude’s, his mobile phone and a lead, to represent the love he had for his dog Sheeba.

Daniel’s dad David, who is originally from Bohernabreena, and Daniel’s brother Dean, spoke during the service of how Daniel lived every minute and that, despite his sudden passing at a young age, this “kind and gentle young boy” had lived a very full and happy life.

In recent days, tributes have been made to Daniel who has been described as a popular and determined young boy who, always smiling, was a very talented sportsman and a “star in the making” – with the young Kingswood resident winning the annual sports award in St Kilian’s Senior School before he finished sixth class in June.

In a Facebook post this week, Daniel’s brother Dean wrote: “You were one in a million, Dano, you were a superstar in the making and I’ll always love you, I’ll never let you go.