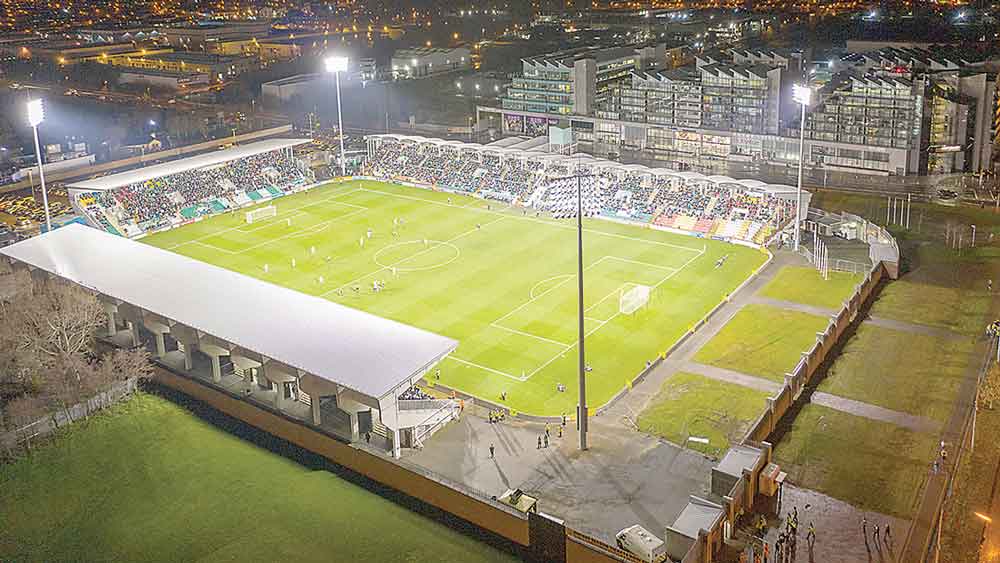 TENDER documents are being prepared for the proposed naming rights and sponsorship opportunity of Tallaght Stadium.

South Dublin County Council has detailed how it continues to invest in tourism infrastructure across the county to aid in the recovery of the sector post Covid-19 restrictions.

At the monthly meeting of the council, the council outlined its plans for tourism recovery in the county in response to a question from Cllr Charlie O’Connor.

“South Dublin County Council continues to work to improve the tourism potential of South Dublin County and has delivered a number of offerings to date whilst continuing to develop other opportunities,” Chief Executive of the council, Daniel McLoughlin, said in his reply.

As part of the detailed response, the council stated that the evaluation of tenders for the construction of the proposed north stand at Tallaght Stadium was completed recently.

It expects contractors to be on site within the “next few months”.

However, the authority also stated that it was “preparing tender documents for the proposed naming rights and sponsorship opportunities at the stadium”.

Elsewhere, a funding boost of €1.4m was received from the Department of Tourism by the council to progress works on the Grand Canal Greenway from 12th Lock to Hazelhatch.

Three new bridges have been constructed as part of the Dodder Greenway, which links Bohernabreena Reservoir to Rathfarnham Castle and Bushy Park.

Site investigation works are currently underway at this location while the local authority is also working with Kildare and Offaly County Council to ensure there is a continuous link from South Dublin to Shannon Harbor.

It was recently reported on in The Echo that a site for a new heritage centre had been identified at Tallaght Town Centre and tender evaluations are currently underway.

The local authority sought the help of a consultant to work on “interpretative planning” and for the “facilitation of an exhibition of South Dublin’s heritage as part of a visitor experience in a new Tallaght Heritage Centre”.

According to the council, it continues to “progress work” to the designation of Lucan as a destination town by Fáilte Ireland.

The council is pursuing an interest in the Old School House in Lucan Village as part of this, which it believes could act as “a bike hire and tourist information hub”.

On March 8, the Tallaght chapter of the South Dublin County Heritage Walking Trail app was launched, with the trail bringing users along 19 sites of social, cultural and heritage interest.

Fáilte Ireland and the council also recently launched visitor interpretation enhancements at the Round Tower visitor centre in Clondalkin.

The co-funded project places a strong focus on telling new stories about monastic life and the Round Towers of Ireland using a range of media including a free downloadable multi-lingual audio guide available in 5 languages.

An outdoor heated space was also added to the centre.

The development of two new markets for next summer is currently under consideration following the success of a trial ‘urban picnic’ outdoor market in Corkagh Park last autumn.

There is a Tourism Event and Festival Grant scheme that has been operated by the council since 2018.

As part of that, funding is made available for businesses and local community groups to support “key priority” areas such as cultural, food, sports and activity-based tourism which are “aimed at growing the visitor economy”.

The budget allocation for this scheme is currently €40,000 and the 2022 iteration is expected to be launched later in March.

This follows the new shopfront grant scheme that was launched in February, which was created with the hopes of improving the appearance of independently owner shops fronting public streets.

The goal of this grant scheme, which is currently accepting applications from eligible businesses, is to make streets and villages around the county “more aesthetically pleasing to both residents and visitors”.

Food and culinary tourism has been identified by the council, with a food strategy due to launch later this year.

The council also raised that a Dublin Mountain Visitor Centre at Montpelier Hill, where the Hellfire Club is located, was granted permission by An Bord Pleanála in 2020 and the project is currently before the Supreme Court in legal proceedings.

Outside of that, the council stated that it remains committed to the Dublin Mountains Partnership.