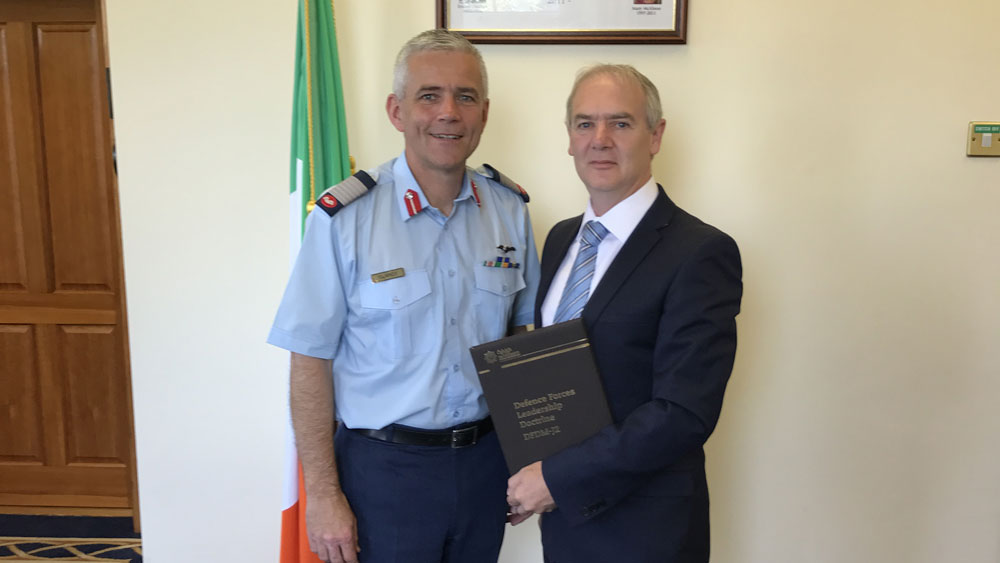 Major General Sean Clancy has been appointed Chief of Staff of the Defence Forces, with Peter Byrne, CEO of South Dublin Chamber

Major General Sean Clancy was recommended for the position by Minister for Defence Simon Coveney and he will succeed the current Chief of Staff, Vice Admiral Mark Mellett, who will retire as the current holder of the appointment on September 29.

Major General Sean Clancy joined the Irish Defence Forces in 1984 as a cadet and commenced his flight training in 1986.

Graduating with a Bachelor of Science Degree from Trinity College, a Masters in Military Leadership and Defence Studies from the National University of Ireland, Maynooth and a Diploma in advanced Management Performance from Smurfit Business School, he has gone on to fly both fixed and rotary wing aircraft, accumulating nearly 5,000 flight hours in his career.

He also is a graduate of the Defence Forces Command and Staff College, where he was a recipient of the Lt Gen Tadgh O’Neill Award.

The Cork native has been a strong advocate for Leadership and was the co-author of the Defence Forces Leadership Doctrine published in 2016.

He subsequently led the team who developed the current vision and values-based strategy for the Defence Forces post the publication of the White Paper on Defence.

“It is very beneficial for leaders in different sectors to understand the different approaches taken in another sector. So, our members were interested in what they could learn from GOC Sean Clancy from how he envisages leadership from a military perspective and what aspects of this transfers to all aspects of work in many sectors.

“On another occasion GOC Clancy kindly welcomed our members to a presentation on the importance of our countries role as a peacekeeping nation and the ways in which our country is positively contributing to our UN mandate.”

Minister Coveney congratulated him on his new role: “I would like to take this opportunity to congratulate Major General Clancy on his new appointment and I look forward to working closely with him in the future.”