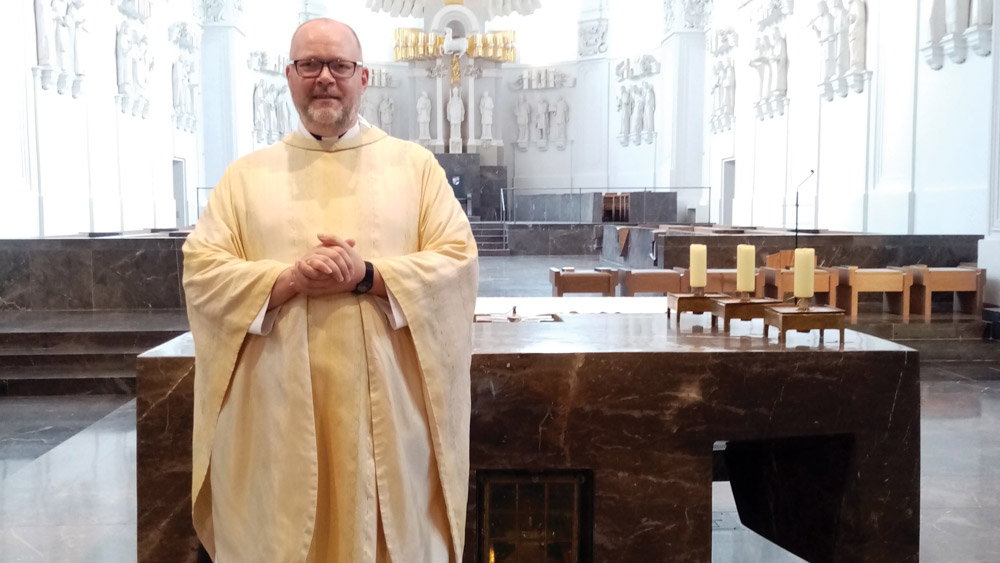 Fr Frank Drescher in Würzburg Cathedral, next to the relics of St Killian (in the altar) after a Mass he recently concelebrated.

New parish priest is ‘happy to start this new chapter’

FR FRANK Drescher has been appointed the new parish priest for Kilnamanagh-Castleview, and he celebrated his first Mass in the parish on July 31.

Fr Drescher is taking over from Fr Michael Murphy, who led the parish for eight years and is now settling into his new parish in Wicklow.

Fr Drescher is originally from the German city of Duisburg but has lived in Ireland for the last ten years. He worked in the business industry before being ordained in September 2020.

Following his ordination, Fr Drescher was a curate in a parish in Blanchardstown, before being appointed parish priest for St Kevin’s Church in Kilnamanagh and St Kilian’s Church in Castleview last month.

This is his first time leading a parish, but Fr Drescher said he’s delighted with his new role and the warm welcome he has received from the parishioners.

“I find that I’m receiving a lot of support from the parish and I’m happy to start this new chapter of my life,” Fr Drescher told The Echo.

Reflecting on his path to the priesthood, Fr Drescher said: “I can see the guiding hand of God in everything I did.

“Before I studied for the priesthood, I worked in sales for IBM in Blanchardstown and in a team leader role.

“I had actually studied for the priesthood in Germany when I was younger, but it was too early for me and I still had doubts, but my years spent in the business world helped me discover what mattered in life.”

When he was ordained by Archbishop Diarmuid Martin in the Pro-Cathedral in September 2020, Fr Frank was described as a young man who had taken “a leap of faith”.

“I remember Frank the first time that we met,” said Archbishop Martin at Fr Drescher’s ordination.

“It was in a suburban parish, and I noticed you as one of the few younger lay people present. You were a successful young man in a promising employment situation.

“Yet I learned that there was something in your heart that seemed to be asking you to move away from that worldly security and to take that leap of faith to serve the Lord.”

That leap of faith has led Fr Drescher to the Kilnamanagh-Castleview Parish, and he’s looking forward to getting to know the local community.

Fr Drescher’s first introduction to the community was at his first Mass in the parish, which was held in St Kevin’s Church on the morning of Sunday, July 31.

He said: “I was told that parish life had gone down after the pandemic, but I was very surprised and taken aback by the outcome of that Mass – a lot of people came to welcome me, and the church was almost full that day.

“The outcome was very positive, and it’s a very good congregation. I’ve been welcomed very warmly and very generously.

“My main aim is to bring parish life back after the last two years of the pandemic.”