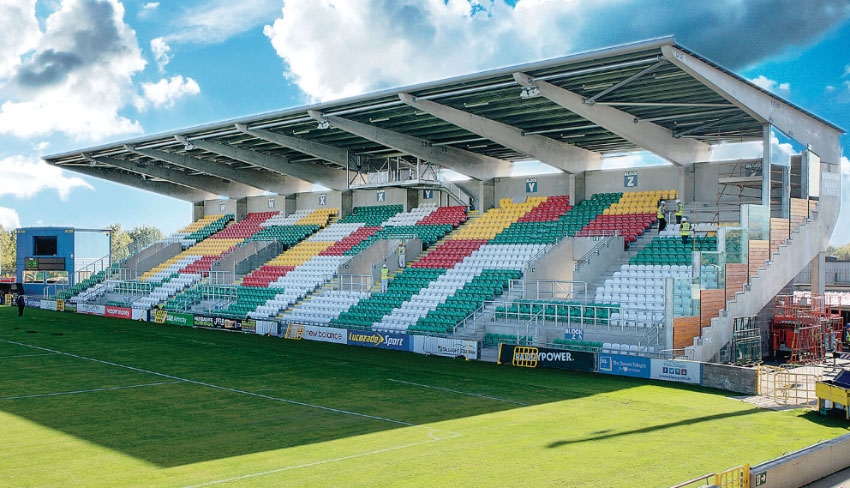 THE NEW third stand at Tallaght Stadium will be ready for use for Shamrock Rovers opening home Airtricity League encounter against Derry City on Friday, February 22.

The new stand will bring the capacity of the stadium from 6,000 to 8,000 and will be a huge boost to sport in South Dublin and the many supporters of Shamrock Rovers.

The new stand at Tallaght Stadium is open for business

The UEFA U17 football tournament will also be held in the stadium in May.

The council also confirmed that work is to commence on the North Stand in the third quarter of 2019 bringing the capacity up to 10,000.

In a question asked by Councillor Charlie O’Connor ahead of this week’s Tallaght Area meeting, the council confirmed that the new completed South Stand is available for business.

In its reply to Cllr O’ Connor’s question, the council said: “The recently completed South Stand, which brought the capacity of the Stadium to 8,000 spectators is ready for use by Shamrock Rovers for the start of their season in February, and for other sporting events that will be held in the Stadium, including the UEFA U/17 football tournament that will be held in May 2019,” acccording to a council spokesperson.

“Cooney Architects presented an Options Report, on the proposed development of the North Stand, along with proposed changes to the existing Main Stand, to the Corporate Policy Group and to the December Council Meeting.

“The Report looked at the future of the Stadium as continuing to host the sporting events, including Shamrock Rovers and FAI games, as well as becoming an event venue for the County.

“The venue to be promoted for use during the day, for Corporate, Business and Training events as well as a potentially unique wedding venue. The venue would be for the local community, the whole county and for visitors from outside the county to use and visit.”

The Stadium currently has a capacity of 8,000, and the Options Report looked at increasing the capacity to 10,000, as well as looking at UEFA Category 4 facility requirements.

The report considered the enhanced flexibility of use in the venue, as well as looking at futureproofing the development.

The report also looked at developing improved Press facilites and seating as well as additional Corporate capacity in a new second floor to be developed in the existing Main Stand, where much of the anticipated Corporate, Business and Wedding events would take place.

An official ceremony will be organised to mark the completion and opening of the Stand by the Council.

“This is great news that the third stand is available to Shamrock Rovers supporters ahead of the new season and it’s a great boost for sport in general,” said Councillor Charlie O’Connor.