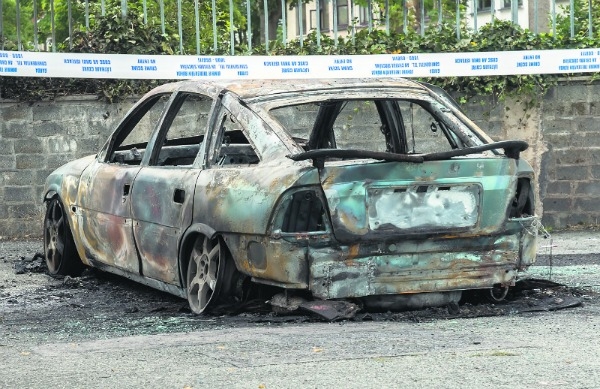 No joy in tackling joyriders, say residents of Harelawn estate in Clondalkin

ONGOING joyriding and scrambler activity in the North Clondalkin estate of Harelawn was blasted this week by residents, who feel “nothing is being done” to tackle the problem.

Last week, joyriders in a Honda Jeep sped through Harelawn Park, cheered on by a gang of up to 20 youths.

The jeep was set on fire in Harelawn Grove at approximately 8pm, before it was put out by Dublin Fire Brigade within half and hour.

According to a local source, youths were also flying through the area on loud motorbikes at the time, causing a massive disturbance for residents.

“We have been asking politicians and authorities to do something since 2014, and nothing gets done,” said a local source.

“What I want is for someone I elected to take a stance in the Dáil and get legislation implemented to improve the safety of residents in the area.”

Sinn Féin TD Eoin O’Broin acknowledged a “persistent problem around a specific group of people”, but said “a lot of work is going on behind the scenes.”

Deputy O’Broin said: “I am in regular contact and liase with the council and gardai. There is a high level of concern in the area, with bonfires and anti-social behaviour. It’s important to get the balance right, a Harelawn environment group do great work in the area.

“The problem isn’t specific to Harelawn, but we firmly need a change in legislation and to look at how easy it is to purchase bikes, tax, age limit, and make it easier for gardai to repossess. I do think gardai and the council need to do more.”

A spokesperson for South Dublin County Council said: “The issue of scramblers and quads remains high on the council’s agenda, with continued liaison with An Garda Síochána and others in relation to their use.

“The level of illegal usage of scramblers and quad bikes in parks and open spaces continues to give rise to significant public safety issues and anti-social behaviour, in many cases causing serious damage to parks and open spaces, of which the council has had direct experience.

“A motion was passed by members of this council at the January council meeting calling on the Government to introduce primary legislation to regulate the ownership and use of all those vehicles and details of that motion were conveyed in a letter to the Government after that meeting. No reply has yet come.