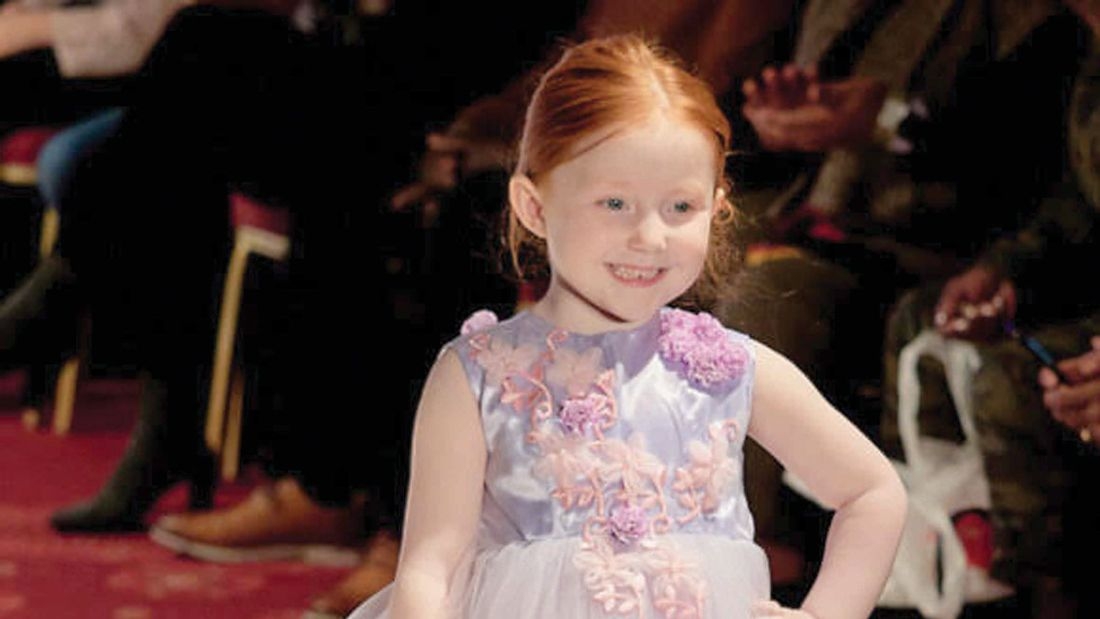 Noelle walks the walk: Young dancer on the catwalk at London fashion week

A gifted young dancer and performer from Tallaght wowed audiences when she walked the catwalk at London Fashion Week earlier this year, and she is now hoping to take part in a children’s fashion show in Amsterdam that’s centred on inclusion and diversity in the near future.

Noelle Kinsella, 5, from Brookview in Tallaght, got to indulge in her passion for fashion at London Fashion Week back in February, where she walked the catwalk for brands including This is Me Couture, Siblings Fashion and Athea Couture.

However, the Scoil Chaitlín Maude pupil was no stranger to the stage before her star turn at modelling – as she is an All-Ireland winning lyric and jazz dancer, who relishes being in the spotlight and sharing her talent, and her experience at London Fashion Week reinforced her enjoyment of performing.

“London Fashion Week was much bigger than we expected it to be,” explained Noelle’s mother, Imogen Kinsella, “but we met a lot of amazing people.

“Noelle really enjoyed the runway and the lights at the end of the runway, where there were over 150 photographers.

“It was very surreal – it was like being in a different world. Noelle was on a bit of a high afterwards, it gave her a huge boost in confidence.”

The young girl’s modelling turn stemmed from her dancing experience, as her mother signed her up for dance classes at age two, where her teachers found she had a natural dancing ability. She then took part in dancing competitions and impressed many judges, winning prizes along the way.

In order to keep in touch with Noelle’s fellow young dancers and the competitions’ judges, Imogen set up an Instagram account under her daughter’s name, which she monitors, and the opportunity to walk in London Fashion Week came about after an event manager got in touch through the app.

Following on from the success of her London Fashion Week debut, little Noelle is hoping to walk the runway at Diversity Fashion Week in Amsterdam later this year, which celebrates diversity and inclusivity.

As for what the talented young girl wants to be when she grows up, Imogen said: “She wants to be everything, from being a dance teacher to a vet.

“If she wants to be a doctor or a nurse or a chef, she can go to school for those things and decide on that for herself when she’s older, but right now I’m just giving her more options. But she loves it – she’s a natural performer.”

Noelle’s Instagram handle is @miss_noelles_world, where you can keep up-to-date with the young girl’s passion for fashion and dancing.