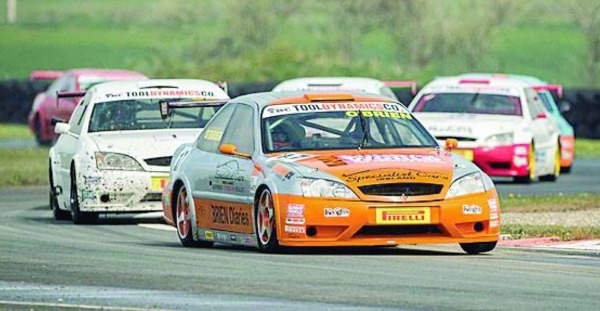 ANDY O’Brien has extended his lead in the Tool Dynamics Supercar Championship following a successful weekend in Bishopscourt.

Having never driven the circuit before, the Templeogue man quickly adapted to the fast flowing track in Downpatrick.

Qualifying, on an ever-drying track, he saw pole split between himself and defending 2015 champion Peter Barrable, with a first place start each for both races.

O’Brien got the jump off the line in Race One and set on building a gap, increasing his lead.

Barrable dropped back to third on the opening circuit with Sam Moffet promoted to second though Barrable made a late move up the inside into the chicane towards the end of the lap.

Problems then struck for O’Brien with an electrical fault causing severe fuel surge and consequently seeing the strong lead eroded.

Barrable went on to take the win with O’Brien finishing a close second.

Barrable took the lead on the run down to Turn One, but O’Brien made a late move back up the inside at Turn Three and went on to claim a convincing victory ahead of his rival in second and Sam Moffet in third.

Reflecting on his race results, O’Brien said “We were unlucky to develop the electrical gremlin that nobody can predict which cost us the victory.

“The team did a great job to identify and rectify the intermittent electrical fault between races. In Race Two the Specialist Cars Ireland Supercar was perfect and we have stretched out our points lead in the championship.”

The championship heads back up north again to Kirkistown Race Circuit on May 27/28, and O’Brien is confident he will go well saying “I’ve had good success previously in Kirkistown and it’s a track I’ve always enjoyed racing. I’m looking forward to another tight battle with the rest of the grid” he added.