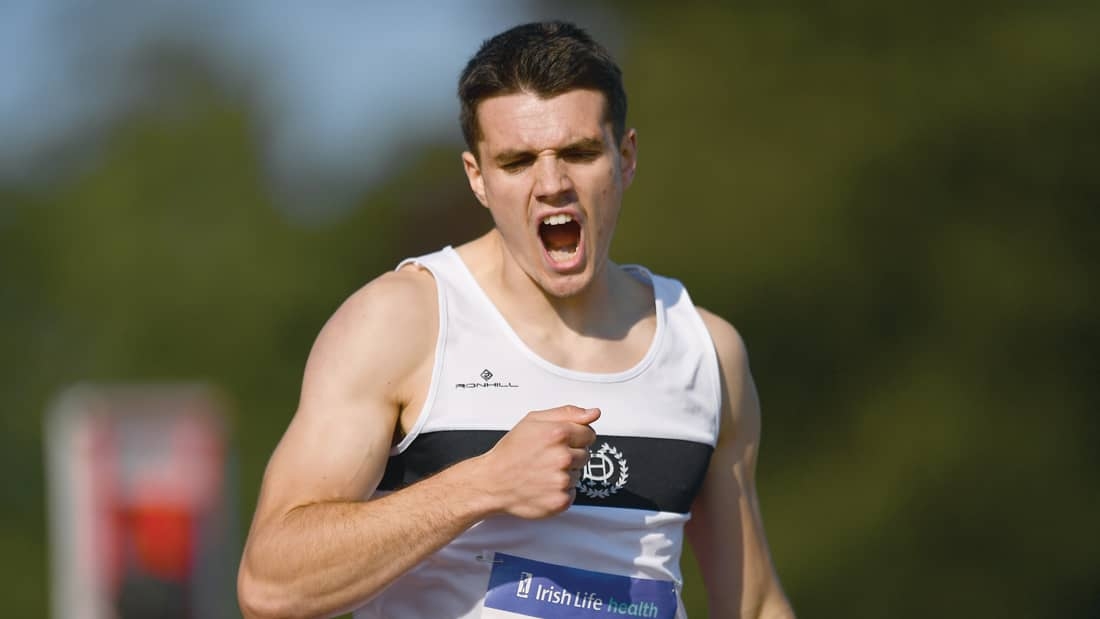 LOUIS O’Loughlin stormed to the 800m gold medal at the National Junior Track and Field Championships at Santry on Sunday.

The Clondalkin man, who qualified for the final earlier in the day by winning Heat Two in 2.01.45, made clear his intentions early on by moving into the lead at the 200m mark although the reigning champion did not have things all his own way.

Jake Bagge of Ferrybank AC remained in close pursuit as they passed the 400m mark in 56 seconds and then the 600m in 1.23.

Indeed the two race leaders opened a gap on the rest of the field, with the Donore Harriers man only gaining a clear advantage over his rival in the closing 30 metres.

Laadjel ran in the middle of the pack during the early stages of the race before gradually making his way to the front to challenge the pre-race favourite.

As the two leaders passed the 2km mark in 2.44 (Donnelly) and 2.45 (Laadjel) the Donore Harriers man made a bid for victory, but was unable to open a wide enough gap to claim the top honour.

Donnelly’s final lap of 63 seconds compared to Laadjel’s 68, proved the difference between gold and silver.

Fathi Aden, making a comeback to competitive running, placed 18th in 9.47.67 from a field of 20 starters.

But, prior to the 200m, a sudden and painful leg injury forced her to withdraw from the contest which was won by Karen Dunne of Bohermeen AC.

First home for Donore was Ray Hynes in 10th place, with new member Robert Murphy just two places further back and Josh O’Sullivan Hourihan clocking a PB of 1.11.33 and, with it, 20th position overall.

In the Morton Live Event at Santry on Friday Emmet O’Briain ran 4.42.85 to finish fourth in the Men’s Mile, with Donal Iremonger placing ninth.