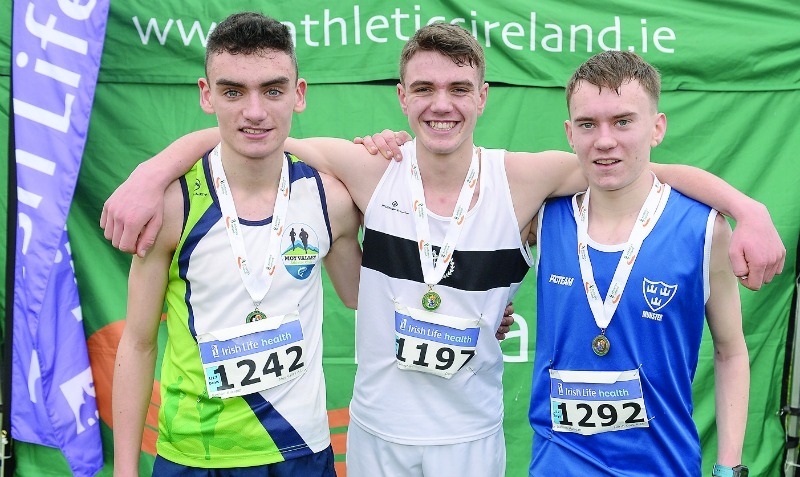 LOUIS O’Loughlin powered his way to his eighth national title this year after he stepped up in age to take the Under 17 Cross Country title at Dundalk IT on Sunday.

Having already bagged national indoor titles for the 800m and 1500m; national outdoor track titles over the same distances; national schools’ victories over 1500m and cross-country; and having recently won the National Under 16 Cross Country title the Donore Harriers athlete was looking to make it a cross-country double.

He made it a fast start that had the effect of stringing the athletes out along the course.

At the one kilometre mark he led an array of challengers, but by the time they had covered 3km only Keenan Kilvihill of Moy Valley AC (Ballina) and Darren Madigan of North Cork AC could attempt to match O’Loughlin’s relentless front-running pace.
And he broke clear over the final two kilometres and increased his lead to win by more than 50 metres.

What’s more O’Loughlin led the Dublin Under 17s team to gold in the inter-county competition.

Jack Raftery (also stepping-up) and Liam Brophy placed 119th and 124th respectively in the same 5km race while Sekeriye Ahmed was forced to withdraw mid-race due to illness.

Matei Ursachi, who was also stepping-up an age category, placed an excellent 22nd in the Boys Under 11 race over 1,500m.

His efforts saw him finished as the third scorer on the Dublin team that placed runner-up in the inter-county category.

After a fine run in the Jingle Bells 5km a week previously where she recorded an excellent 19m.31s, the talented Roisin Brady (stepping up) was disappointed to place only 85th in the Girls Under 17 race over four kilometres.

In the Boys Under 15 contest, over 3.5km, Barney Kelly was in the top 20 throughout the early stages, but struggled during the middle section before rallying with a big sprint finish to place 41st overall.

The ever-consistent Eliza Ní Thighearnaigh was the only Donore Harrier in the Girls Under 19s event over 4km, finishing 32nd.