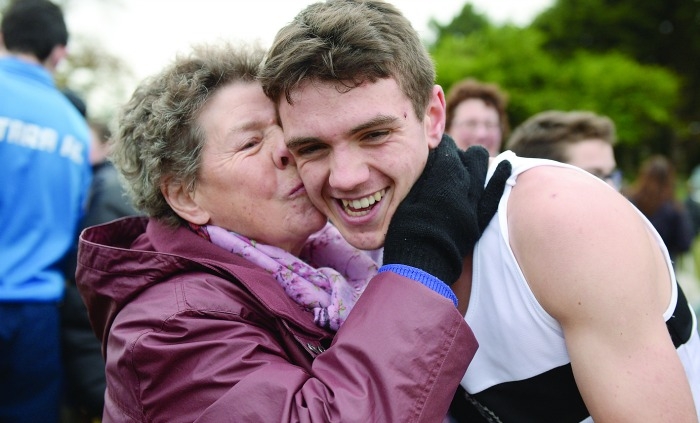 O’Loughlin wins Under 16 title in Abbotstown

LOUIS O’Loughlin continued hauling in the medals with another superb win in the National Under 16 Boys Cross Country Championship race held in Abbotstown on Sunday.

The Donore Harriers athlete opened a gap on his nearest challengers, Conor Maguire of Monaghan Phoenix and Christopher O’Reilly of Togher AC, as the race headed out into the second of two 2km laps.

And he powered up the last climb before the home straight to finish up some 50 metres ahead of Maguire for what was, no less than his 11th national title in less than two years.

He will now continue on to represent Ireland in the Celtic Cross-Country fixture in Wales on January 21.

Joining O’Loughlin on the Irish team will be his club-mate Fathi Aden who, after making a conservative start in the Under 16s contest, gained some 20 places to cross the line in fourth.

Both he and O’Loughlin led the Dublin team to gold medals in the inter-county category.

The Donore Harriers team placed eighth on 212 points with the scoring team completed by Barney Kelly, who was stepping up an age-group and finished in 78th with Keenan McDonnell in 129th while non-scoring athletes Jack Raftery and Alan Reid came home in 133rd in 145th respectively.

Suzanne Masterson, meanwhile, finished up the sixth and final scorer on the Dublin Under 18 girls county team that won the gold medals as she placed 41st overall, with her Donore Harriers team-mate Eliza Ní Thighearnaigh placing 49th.