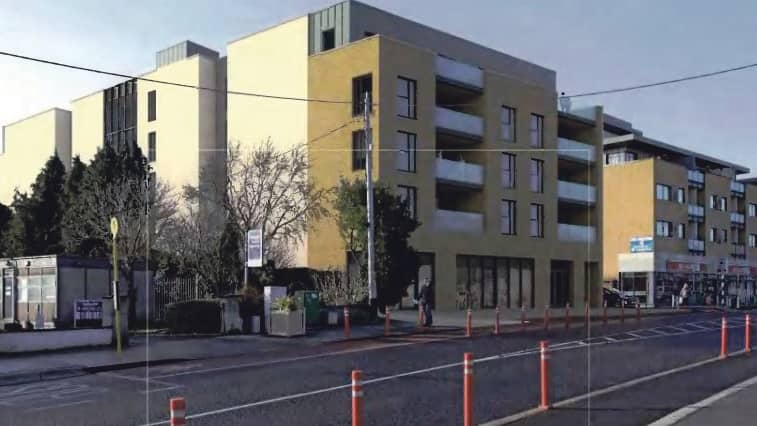 Old Bank of Ireland knocked down for apartments

THE skyline of Tallaght Village is set for further change after construction crews demolished Bruce House to pave the way for a five-story mixed use development.

Located beside Priorsgate on Main Road, Bruce House is most commonly known as the former home of Bank of Ireland’s Tallaght branch.

Sheltered by a number of trees, the two-storey house was built around 1954 by the Molloy family, of Molloy’s pub in the Village, and was originally called Kilronan.

Around 1970, the house was sold to Bank of Ireland, which renamed it Bruce House.

Bank of Ireland settled in Bruce House for close to four decades, until moving to a new premises further up Main Road around 2010.

In more recent years, Bruce House, was for a time home to Threshold Training Network.

After more than 65 years standing on Main Road, Bruce House is no more, after construction crews last week moved on site to demolish the building.

The Bank of Ireland before it was knocked down

In June 2018, Irish Residential Properties REIT Plc (IRES) lodged a planning application with South Dublin County Council for a five-storey building to house a retail unit and 31 apartments at the Bruce House site.

The application, which was passed by the council in August 2018, provides for 11 one-bed units, 19 two-bed units and one, three-bed unit.

It also provides for 32 enclosed bicycle spaces, with 29 car parking spaces provided in the existing basement level of the adjoining Priorsgate scheme.

An artist impression of how the apartments will look when the developement is complete in Tallaght Village, just before the existing Spar shop and Lloyds Pharmacy Photo IRES

In September 2018, the council’s decision to grant permission was appealed to An Bord Pleanala by Tallaght Community Council (TCC).

In a detailed appeal, which cited concerns with the development’s height and density, TCC also noted the ‘demand’ for three-bed apartments in the area.

In January 2019, An Bord Pleanala upheld South Dublin County Council’s decision to grant permission, subject to a number of conditions.

The planning authority ruled that, subject to conditions, the proposed development would “not seriously injure the visual or other amenities of the area” and is “acceptable in terms of pedestrian and traffic safety”.

According to an IRES spokesperson: “I-Res REIT has conducted works on the site recently to secure it from a health and safety perspective.

“The timeline for construction has not yet been determined.”