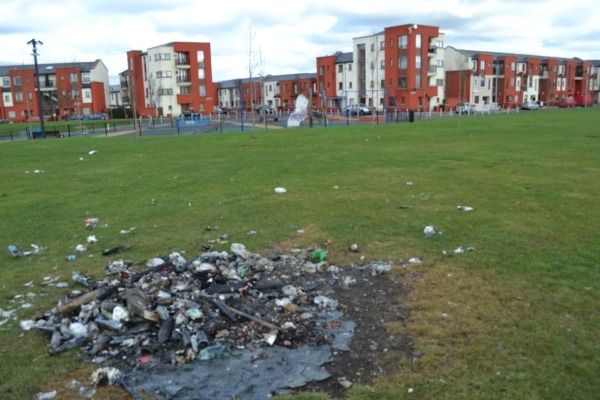 ‘Ongoing vandalism’ plus discarded syringes are some of the problems

SYRINGES discarded in a children’s playground are yet another symbol of the problems facing residents in a troubled estate.

Drug-dealing at an “unsafe” playground in Balgaddy has become a regular occurrence, according to Independent councillor Francis Timmons, who discovered up to 15 syringes at the site two weeks ago.

“I’ve been campaigning for Balgaddy two years now, since I was elected, and we’re not seeing any improvements, other than a few doors fixed,” said Cllr Timmons.

“Drugs are being sold at noon and 1pm in the playground. A very small minority are dealing and taking drugs. It was probably a nice playground when it was put in, but it has deteriorated and is now in desperate shape. It’s subject to fires, vandalism, and a wheelchair-accessible swing was cut down. It’s not safe. It appears the law has left Balgaddy.”

One Balgaddy resident that The Echo spoke to cited “ongoing vandalism and carry-on” as a “constant” theme in the open spaces.

Balgaddy was built 10 years ago, but was one of 20 local authority estates in Ireland which took a complaint against the Irish State to the European Committee in Strasbourg – outlining sub-standard housing conditions.

“I’ve asked the council for a copy of the response they sent back to the EU – I want to see that,” said Cllr Timmons.
Timmons also flagged concerns with regard to local housing tenants refusing the offer of a home in Balgaddy.

“Most people are refusing, then you are getting families from other areas, adding anti-social problems to an area that already has a lot of problems.”

Over 550 maintenance complaints have been lodged by tenants in Méile an Rí, Tor and Rí, Buirg an Rí, and Foxdene Avenue, with South Dublin County Council over the past 12 months.

Cllr Timmons continued: “One woman got a new shower, which was brilliant, but she was waiting three years, and her landing is sinking.

“I think SDCC are beginning to admit there are issues but I’d be glad if we could move on to other things. A substantial amount of units have issues, but if damp was fixed, residents would like to stay. People were promised ideal social housing, with services, shops, community centre and business centre.”