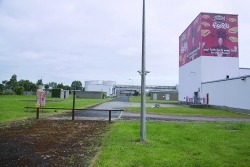 is expected to generate a major boost for the local economy, in terms of jobs and investment.
The Echo understands the online retail giant have bought the building – which has been lying vacant since Jacobs closed its doors in 2008 - and plan to move in this September.
The Jacobs acquisition follows Amazon developments at two data centres on the Greenhills Road in recent months.

The US behemoth completed work on a data centre at the former Tesco warehouse, and are currently working on completing another data centre at the former Shinko building.
The Echo broke the story of Amazon making their way to Tallaght on February 16, 2011 after the company bought the former Tesco warehouse for just under €7.5million.
Around 50 construction jobs were created as a result of the Shinko development, but jobs and construction projections for the Jacobs site, are expected to scale into the hundreds.
The company have created hundreds of jobs in Dublin in the last nine years.
Amazon also moved its Dublin Development Centre to a 69,000 sq ft facility Burlington Plaza in January.
The offices are home to 450 engineers and developers to support the Amazon websites and web services.
At the announcement in January, Jeff Caselden, Managing Director of Amazon Development Centre, said the Dublin 4 office will allow them to continue to create jobs in Dublin.
Amazon did not reply to phone calls or emails by The Echo.
South Dublin County Council nor the IDA have had any formal contact with the company.
However, The Echo understands Amazon has placed their security firm at the Jacobs site in the last week and the site has been bought, although details of the sale are unknown at this stage.
Last year, Amazon moved into a new 15-storey corporate office on the outskirts of London.
The 600,000 sq ft Shoreditch building will provide “total capacity” for more than 5,000 employees – who will transfer from other facilities in London to the new building.
The company employ 7,000 people in permanent jobs across the UK.
Sinn Féin Councillor Cathal King welcomed the development.
“For someone as big as Amazon coming in, it has huge potential,”said Cllr King.
“In terms of creating jobs and the revenue it will bring in with commercial rates. It could potentially deliver better services for people in South Dublin County. And it will be good to see a building which has been lying idle for so long developed.”
Independent Councillor Dermot Richardson, was a fervent supporter in generating business at the Jacobs building – calling for the council to look at the possibility of attracting new businesses to the site during a council meeting in May.
Amazon’s 20th anniversary is on July 16 – its electronic commerce business is growing at an incredible rate.
The company has over 154,000 employees worldwide, 36,800 more employees than it had a year ago – with established facilities throughout key global markets in North America, Europe, India and China.
This doesn’t include contractors who work in the company warehouses or seasonal workers.