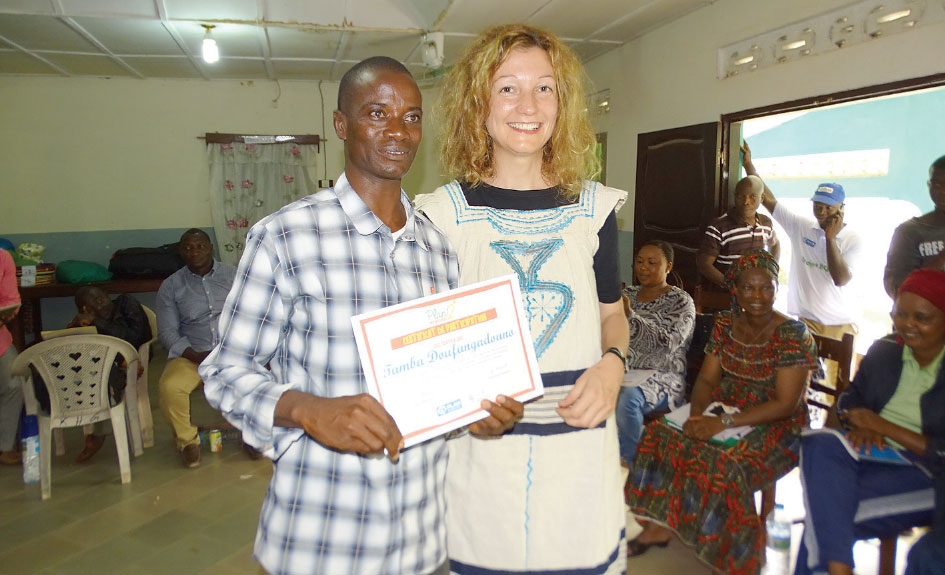 Opening up sport to children with disabilities in West Africa

A Lucan woman has returned to Ireland after a two-week stint in Guinea, West Africa, working on projects with Plan International.

Barbara Scettri, after three days of travelling by airplane and car, reached Guekedou, a region in Guinea that borders the West African countries of Liberia and Sierra Leone.

Here she was trained on how to include children with disabilities in sporting activities.

Barbara said: “This is a part of the world where it is particularly difficult to be a child affected by disability.”

According to Barbara, it is estimated that 15 per cent of the world’s population lives with a disability, of which 106 million children are estimated to have moderate or severe disabilities.

In West Africa, many of these children are subject to poverty, exclusion and discrimination, and they often do not attend school because their families are ashamed or believe their child does not have the ability to learn.

During her time in Guinea, she met representatives from government Ministries, NGOs and the Guinea Paralympic Committee, where they developed an understanding of the issue and learnt more than they thought they could about inclusion of sport.

The president of a local NGO for people with disabilities, said: “Before this week, I would never have imagined it was possible for me to forget that I am a disabled person and that other people would be willing to play with me and even to touch me.”

“I felt the joy I should have experienced when I was a child.”

The UN, according to Barbara, adopted the saying, “Leaving no one behind,” which would include those with disabilities.

She says, “to ensure that no one is left behind, we must all work to enhance inclusion to ensure everyone has equal access to opportunities.”

“Then, and only then, can the joy that my Guinean colleague spoke of be enjoyed by each and every child, regardless of his or her ability.”

Barbara will now be working with the Plan International team in Guinea to make sure that what she learned from the disability workshop will be incorporated in education projects. Barbara intends to go back to West Africa if needed.