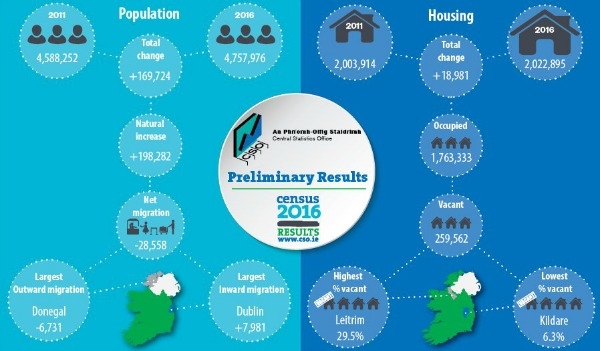 By Mary Dennehy and Laura Lyne

ACCORDING to the preliminary results of Census 2016 there’s an additional 13,544 people living in South Dublin County since the last census in 2011 – with areas in Tallaght and Lucan making the national top ten list of places that experienced the highest population growth.

The highest population increase nationally was Fingal in Dublin, which grew by eight per cent, while the biggest fall was in Donegal, where the population fell by 1.5 per cent.

This growth in population reflects a 5.1 per cent increase, the eight highest national increase in a local authority area.

The highest population jump by electoral area in Tallaght is Springfield, which experienced the sixth highest population increase in the country, with the number of people living within the area jumping from 9,123 in 2011 to 11,068 in 2016 – an increase of 1,945 people.

Examining the preliminary figures for Tallaght, the most significant increases have been recorded in Tallaght West and up into Saggart and Rathcoole – a reflection of the many new housing estates which have been developed across these areas in recent years.

The population of Jobstown is also up by 1,158, with the area’s population now recorded at a mighty 17,788.

There has not been many decreases in population recorded across Tallaght however, the electoral area of Belgard experienced a 0.4 per cent decrease – that’s seven less people since 2011 – with its population now standing at 1,687.

On the other side of Tallaght, the electoral ward of Firhouse-Ballycullen is up 6.5 per cent, with the population growing by 507 people to 8,280.

As you move across South Dublin County from Tallaght into Templeogue and Ballyroan, a number of the electoral wards have experienced a decrease in population.

For example, the electoral area of Ballyboden is down 2.5 per cent with the population currently at 4,959 while the area of Templeogue-Cypress is down 3 per cent to 2,712.

Throughout the areas of Clondalkin and Ballyfermot there was little change in population, with the highest increase in the Clondalkin village electoral area which experienced a growth of 661 people (7.8 per cent) while the electoral area of Kilmainham C jumped by 808 people (18.5 per cent).

A decrease was recorded in Cherry Orchard (-167 or 4 per cent) and Palmerstown West (-101 or 1.3 per cent) but it had little impact on the increase in population among South Dublin and South Central areas.

The preliminary results also examined housing and vacant properties and while South Dublin County’s population grew 5.1 per cent, the number of households grew by only 3.6 per cent.

Nationally however, South Dublin County has the lowest number of vacant dwellings by local authority area in the country, with vacant dwellings making up four per cent of its overall housing stock.

Vacancy rates throughout Clondalkin, Lucan and Ballyfermot were all less than 10 per cent, with one of the lowest vacancy rates in Cherry Orchard A (11 units or 1.4 per cent).

Some of the highest vacancy rates included parts of Kilmainham and Inchicore, with 188 vacant dwellings or 15 per cent vacancy in the Kilmainham B electoral area.

In Tallaght and Templeogue, vacancy rates were also below 10 per cent, with some of the higher vacancy rates per number of dwellings including Ballyboden (110 dwellings or 6 per cent), Springfield (230 units or 5.7 per cent) and Jobstown, which has 217 vacant properties out of the area’s total number of 5,843 dwellings (3.7 per cent). For further information on all areas visit www.cso.ie.

Fettercairn is also up, with 711 additional people.

per cent with the population currently at 4,959.

Rathfarnham-Butterfield is up 2.8 per cent, and now has a population of 3,296.

Cherry Orchard recorded a decrease of 167.