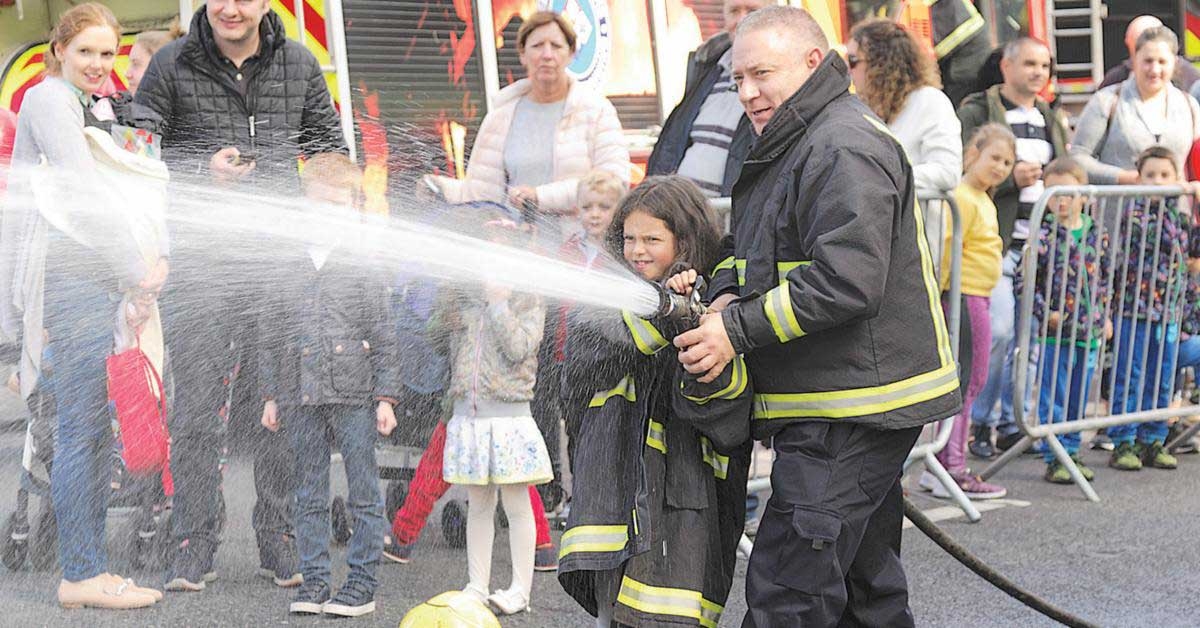 OVER 16,000 people were in Lucan to celebrate the tenth year of the Lucan festival. It was the culmination of a very successful festival weekend.

The festival kicked off with a fireworks display. Joe Byrne from the Festival Committee told The Echo: “The fireworks were fabulous and the Gardai were very happy with the way we managed the crowds.”

Xochi with Aidan from Efast Emergency Fire and Rescue Service at the Lucan Festival. Photo by Paddy Barrett

The focus switched to the magnificent residence of the Italian ambassador, Lucan House, where visitors were treated to a tour of the historic house and grounds.

On Sunday, September 9, saw the family day in the village. Joe estimates that over 16,000 people were in the Village on Sunday.

The Barracuda fire truck from Weston Aerodrome, one of the largest firetrucks in the republic, was a huge hit with the local children.

An Garda Siochana held an open day and members of the Emergency Response Unit came along with their vehicles including a sea rescue boat.

For the first time there was also a rock stage at the festival and six bands entertained the crowds. There were also 13 food stalls from different parts of the country.

Joe told The Echo: “It looks like everybody had a great time because we have just been getting positive messages about how much fun they had.

“There was only one note of criticism from one woman who felt the festival had got too commercial. I explained to her that it was our tenth festival and we wanted to give back something to the community.”

Councillor Danny O’Brien attended the festival and represented the Mayor.

He said: “I was very proud to be present at the Lucan Festival and to representing the Mayor. I was also proud to support the Stardust Truth Campaign. It really is such a special day for the community’. He said that there was something there for everyone, families and friends, young and old.”

Cllr O’Brien said the food stalls were particularly tempting and he praised the entertainers for their work.

He added: “As always Lucan Garda Station played a huge part in the day and deserves special thanks. I would also like to take this opportunity to thank the Lucan Festival Association for the endless organisation required and their continued hard work.

“This is the tenth year of the festival and each year it just gets bigger and better.  So many people give up their time to make a difference. The smiling faces and laughing children make the Festival one of the highlights of the year.”