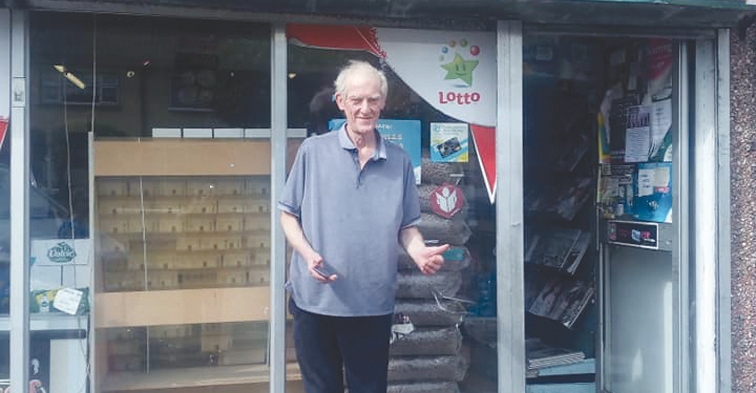 TRIBUTES have poured in for shopkeeper Harry Reynolds, who retired last week after working day in day out for 55 years at his St Brigid’s Road newsagent in Clondalkin.

Harry (70) first started working in the shop with his father Owen Reynolds in 1963.

Harry Reynolds outside his newsagent at St Brigid's Road

Reynolds Newsagent harks back to a more traditional time where the shopkeeper knew everyone’s name, and accepted money for goods by casually totting up a number on the back of a piece of carboard from a cereal box.

Although the store will remain open, and run by former Clondalkin councillor Tony Delaney, Harry’s retirement led to an outpouring on social media, with many expressing sadness whilst also wishing him and his wife Maureen the best of luck.

“I couldn’t believe the response, I have a lorry load of presents, it has been unbelievable – the people are magic around there,” said Harry.

“You wouldn’t like to see it closing but Tony is a good man. When you get to 70, that’s about it, but we’ll do our best.”

Tasty rolls, jam doughnuts and old school character were among the reasons local councilor Trevor Gilligan nominated Reynolds for a 98FM Best of Dublin Award in 2017.

Councillor Trevor Gilligan said: “I was delighted to nominate Harry for the Best Shop in Dublin for his ham rolls and jammy doughnuts. Lovely guy, hard worker. I’ll miss popping into him for my grocery shopping and wish him well in the future.”

With hard work you can achieve anything

After the passing of his father 25 years ago, Harry ran the business with his wife Maureen.

The pair worked through some difficult periods but their perseverance paid off.

“With hard work you can achieve anything,” said Harry.

“It is the key to anything. You don’t need to be millionaires, just comfortable. We never took a day off, madness really, but it was good.

“We enjoyed it. When my wife wasn’t able for it anymore a few years ago, I did get sick of making the rolls.”

Originally from Meath, Harry makes a wild claim that he is “half a Dub”, but one thing for sure, he is looking forward to enjoying some time off for “fishing and a few pints.”