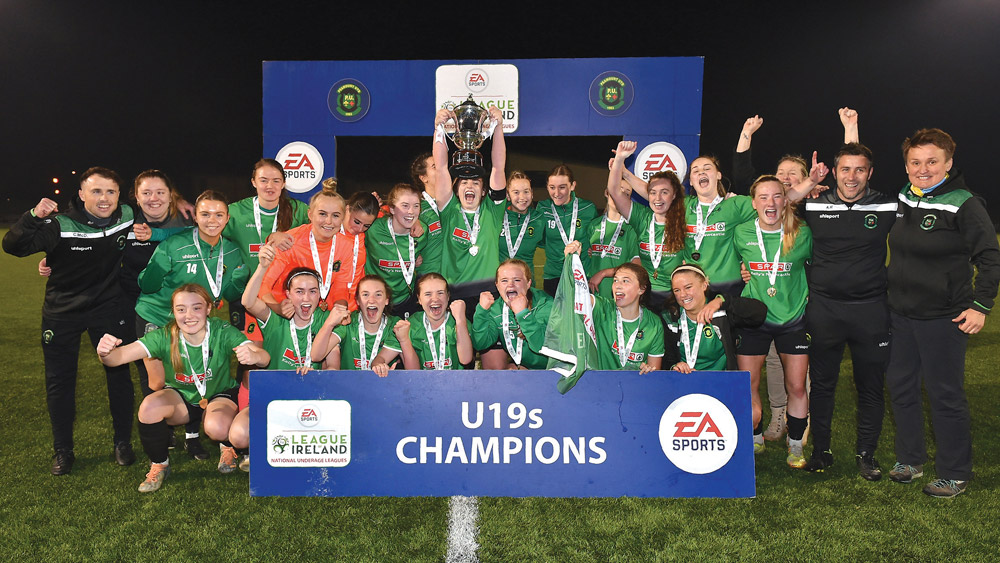 IT WAS mission accomplished by Peamount United’s U19 women’s soccer team after they claimed the EA Sports Cup title following their well-deserved 3-0 victory over Shamrock Rovers in Athlone on Friday.

Having lost to Rovers on three occasions in the league this season, the Newcastle girls put together a solid performance to lift the trophy for the first time.

“I’m delighted for the girls, they have worked so hard this season and to win this trophy is brilliant,” Peamount United manager Alban Hysa told The Echo.

“It was a big relief when the final whistle went with all the hard work paying off for the team,” he said.

The deadlock was broken on 16 minutes when Ellen Dolan put Ireland U17 international Tara O’Hanlon through on goal and she cleverly chipped the ball into the back of the net.

With the contest still hanging in the balance, Peamount doubled their advantage on 56th minutes when Hannah Martin let fly a cracking 30-yard strike to the back of the Rovers net.

With Peamount growing in confidence, they wrapped up the match nine minutes later when substitute Michelle Doonan, only on the pitch 90 seconds, buried the ball to the back of the net to kickstart wild celebrations.

It was a performance that rounded off a good season for Peas with defenders Sarah Power and Rebecca McMahon leading by example in defence while Tara O’Hanlon was awarded the Player of the Match Award.

Having lost only four games out of 25 in the league – three of them to Rovers, Peamount manager Alban Hysa was delighted with the outcome.

“There is plenty of talent in the squad and we are already looking forward to next season.”

Peamount currently have Irish internationals Summer Lawless, Tara O’Hanlon along with U17 internationals Eabha Flemming, Ellen Dolan and Jess Fitzgerald so all looks well for the Newcastle Club in the future.